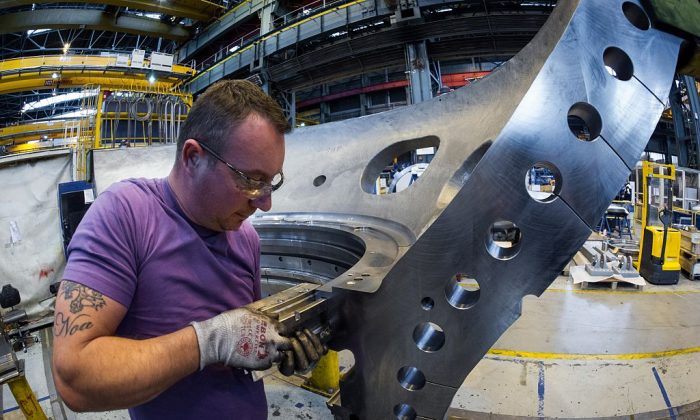 An employee of US multinational General Electric (GE) works on a gas turbine at the GE plant in Belfort, eastern France, on Oct. 27, 2015. (Sebastien Bozon/AFP/Getty Images)
Companies

NEW YORK—Utilities are shutting down at least 18 of General Electric Co.’s newest gas turbines for repairs at power plants from Taiwan to France, according to more than a dozen interviews with plant operators and industry experts.

The shutdowns, which follow a recent GE turbine blade failure in Texas, come as GE grapples with financial losses and a drop in orders for the massive generators that can supply electricity to hundreds of thousands of homes.

GE is setting aside $480 million to repair its 9HA, 7HA, and 9FB model turbines as it restructures its power business. The 126-year-old conglomerate has declined to say how many have been shut down, or when it would replace parts—if needed—in as many as 130 such turbines it has produced.

In an interview, GE gas power systems CEO Chuck Nugent played down the significance of turbine shutdowns and the French data, saying that GE turbines are performing “extremely well,” despite the need for “early maintenance” to fix the blades.

Considering all of the power turbines it has in use, GE has “the most reliable fleet in the world—99 percent, give or take, reliability,” he added.

GE previously disclosed that its equipment needing blade repairs includes four 7HA turbines in Texas that were shut after oxidation caused a blade to fail in one of them in September. Those turbines are included in the 18 being shut down.

Photographs of the damaged turbine reviewed by Reuters show dozens of jagged and broken blades inside the massive machine, owned by Exelon Corp. The turbines are now running after two months of repairs, Exelon said.

GE told Reuters it identified the oxidation problem in 2015, and developed a fix before the failure in Texas. The fix uses an earlier casting method that was employed on other turbine models.

“Overall, we’ve been very pleased with GE’s HA technology and its performance capabilities,” said Beth Conley, a spokeswoman at Invenergy, which is receiving replacement blades for three new HA turbines at a Pennsylvania plant that has not yet opened.

Following the problems in Texas, state-owned utility Electricite de France closed its plant in the northern French town of Bouchain for a month starting in late September for blade replacements. Bouchain was the first plant worldwide to install GE’s 9HA turbine.

Bouchain has logged 86 outages for equipment failure, testing or other reasons from January 2017 to October 2018, five times the average for non-GE plants, according to data from French grid operator RTE analyzed by Reuters. Reuters excluded outages for planned maintenance.

The French data also show that plants with GE turbines have closed for repairs or testing, on average, more than twice as often as non-GE gas-fueled plants in France with turbines made by Alstom, Siemens AG,  and Ansaldo Energia SpA. GE acquired Alstom’s power business in 2015.

GE and EDF officials told Reuters that the data from grid operator RTE, an independent subsidiary of EDF, are “not wrong,” but should not be used to assess turbine performance because some outages might be due to other equipment at the plants.

EDF said there are no problems at Bouchain, which opened in 2016, and that frequent shutdowns are not unusual for new plants during their break-in period. EDF said Bouchain’s output is cycled up and down to meet peaks in electricity demand rather than running constantly. The other gas-fired plants tracked by RTE also can be used for peaking and have been in operation for many years.

Reuters could not obtain comparable data on how often GE’s turbines shut down for repair at utilities around the world. Shutdowns are triggered when utilities determine that a plant needs to be serviced or tested, or when equipment failure or other problems cause the plant to shut down unexpectedly.

While GE plants still produce a third of the world’s electricity, GE fell from first to third place in new turbine orders by capacity, behind Mitsubishi and Siemens, according to a first-half tally by McCoy Power Reports, a widely watched industry data source.

GE said its market share was 51 percent in the third quarter, according to McCoy.

GE said it booked seven HA turbine orders in the first nine months of this year, half as many as in the same period last year.

GE’s HA turbines have come under particular pressure and its plant repair business is facing growing competition. The success of GE’s new turbines are of increasing importance as it slims down to focus on power plants, jet engines and wind turbines in a flurry of restructuring. GE spent more than two decades developing the 400-ton machines, but brought them to market after rivals Siemens and Mitsubishi were gaining market share, forcing GE to catch up.

GE undercut its rivals’ prices by about 20 percent “to go from 0 percent to about 45 percent share of this turbine class by 2016,” Morgan Stanley analysts said in a report this year.

Now Chief Executive Officer Larry Culp is battling to restore GE’s profit and slash debt after the company lost $22.8 billion last quarter, mostly from its power unit, and its credit rating fell to just three notches above junk. Culp is splitting up the power division, consolidating its power headquarters to cut costs and has named new leaders for it.

Demand for large gas turbines is at a 23-year low, forcing GE and rivals to fight hard for fewer deals as utilities buy more wind and solar systems that have become cost competitive.

Scott Strazik, the new chief executive of GE Gas Power, said in an interview that customers are happy with GE’s response to the blade issue and GE has no plans to change how it handles customer issues, or how it tests turbines, noting GE’s test facility is the largest and most comprehensive in the world.

“The HA is the fastest-selling gas turbine that we have, and customers continue to have a strong desire for the HA,” Strazik said.