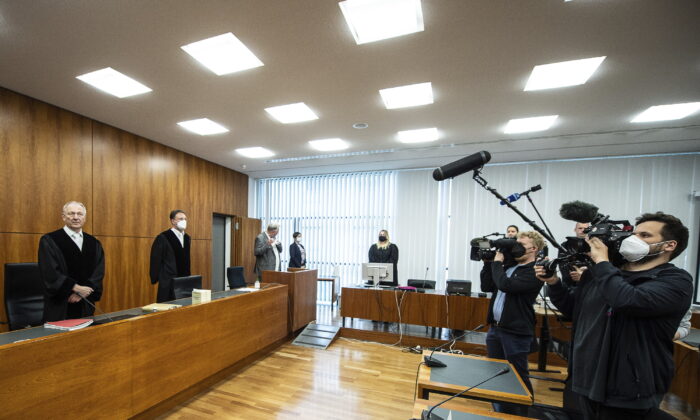 Volker Muetze (L), presiding judge at the Regional Court, stands in the courtroom for the opening in Kassel, Germany, on May 25, 2022. (Swen Pfoertner/dpa via AP)
Europe

Germany: Fake Doctor Gets Life in Prison for Patient Deaths

BERLIN—A German court on Wednesday sentenced a woman who posed as a doctor to life in prison for causing the deaths of several people she treated.

Judges at the regional court in Kassel said the evidence showed the 51-year-old woman, whose name was not given in line with German privacy rules, used a forged license to obtain employment as an anesthesiologist.

The judges determined that three patients died as a result of treatment errors, while others suffered serious damage, German news agency dpa reported. They sentenced the woman on three counts of murder and 10 counts of attempted murder.

The judges cited the special gravity of the crimes, making it more difficult for the woman to be released from prison after 15 years. That’s the amount of time people given life sentences in Germany must serve to be considered for possible release.

Prosecutors accused the woman of having wrongly dosed anesthetics and of having failed to treat blood poisoning at a hospital in Fritzlar, a town near Kassel. She is also said to have been responsible for hours of oxygen deprivation as well as damage to the cardiovascular system and organ failure in patients, dpa reported.

The prosecutors claimed that the woman acted on the basis of an excessive need for recognition.

After working at the Fritzlar hospital from 2015 to 2018, the woman moved to a clinic in northern Germany. Officials from a regional medical association flagged discrepancies in her records, and she eventually turned herself in for employment fraud. The Hesse Medical Association and her former employer also reported her.