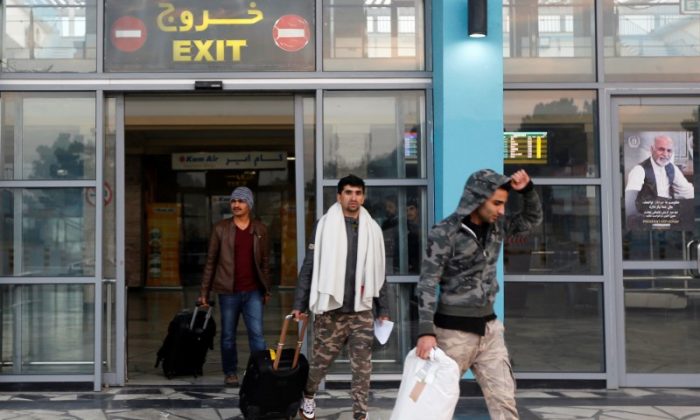 Afghans, whose asylum applications have been rejected, arrive from Germany in Kabul airport, Afghanistan on Dec. 15, 2016. (REUTERS/Omar Sobhani)
International

BERLIN—Germany approved just under 48 percent of asylum applications from Afghan migrants in the first two months of 2017, down from close to 78 percent in 2015, the Passauer Neue Presse German newspaper reported on Sunday.

The newspaper, citing a response from the German interior ministry to a parliamentary query by the Left party, said the government rejected 14,403 of the 27,639 asylum applications considered in January and February.

It said the approval rate had dropped to just over 60 percent in 2016 and fallen further this year. The rate is lower than the 55 percent identified by German Chancellor Angela Merkel this month.

News of the drop comes after a report that thousands of former Taliban fighters may have entered Germany over the past two years among an influx of more than a million migrants and refugees, prompting investigations by federal prosecutors.

Ulla Jelpke, a Left party lawmaker, criticized the government’s tougher stance on asylum approvals for Afghan migrants at a time when the security situation was worsening.

“It’s a result of political orders to increase deportations and send a warning signal,” she told the newspaper.

Merkel’s government, under fire for allowing in large numbers of migrants, especially after several militant attacks linked to migrants last year, has been actively deporting groups of rejected Afghan asylum-seekers.

Merkel, seeking a fourth term in a Sept. 24 election, this month defended increased deportations of rejected Afghan asylum-seekers, saying all other European Union countries were doing the same.

At the time, she said about 55 percent of Afghans were granted refugee status in Germany.

A fifth planeload of Afghans is due to be deported back to Afghanistan on Monday, the newspaper said.

The cost of the first four flights was estimated at 1.3 million euros ($1.4 million), it said, citing a government response to a query by the Greens party. Those costs are covered by EU border protection agency Frontex.