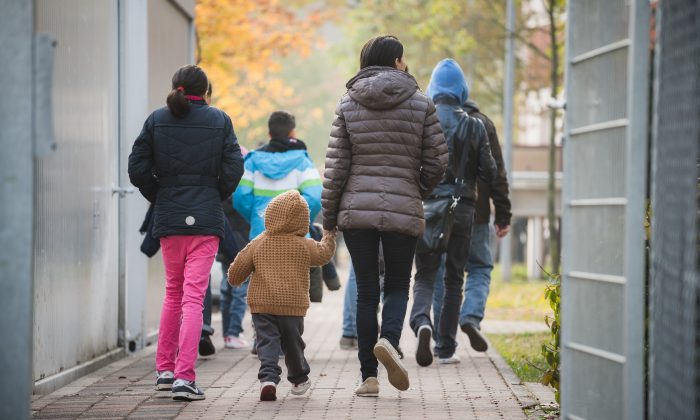 Refugees walk through a deportation center in Bamberg, Germany, on Oct. 22, 2015. Hundreds of asylum seekers, most of the from western Balkan nations, who have had their applications rejected are awaiting deportations. (Nicolas Armer/DPA via AP)
Europe

BAMBERG, Germany—Faced with an unprecedented influx of refugees and growing anxiety among voters, German authorities have stepped up the deportation of failed asylum-seekers.

New figures show that the number of deportations almost doubled this year from 2014. By the end of November, authorities had deported 18,363 people whose asylum request had been rejected, compared to 10,884 in all of last year.

“(The increase) can be explained on the one hand simply by the increasing number of people who are getting negative (asylum) decisions,” Interior Ministry spokesman Johannes Dimroth said Monday.

But the trend is also affected “by the states’ increasing willingness to carry out these procedures,” he said.

The task of handling asylum requests falls to Germany’s 16 states and some have been more rigorous in applying the law than others.

Bavaria, the state that most asylum-seekers first set foot in, more than trebled its deportations to 3,643 in the first 11 months of 2015 from 1,007 last year. The conservative government there has been particularly forceful in pushing to limit the number of refugees coming to Germany—estimated at about one million this year—and speed up deportations of those already in the country.

Earlier this year, Bavaria opened a special center for people unlikely to get asylum. Situated on a former U.S. Army barracks in Bamberg, 50 kilometers (31 miles) north of Nuremberg, the Arrival and Return Facility II currently houses about 850 people.

Almost all are from western Balkan nations, chiefly Albania, followed by Kosovo, Serbia, Bosnia and Macedonia.

Germany considers them to be safe countries where individuals are unlikely to face the kind of persecution that would warrant asylum. Some were sent to the center straight from the border, others have been in Germany for more than a year. Most said economic hardship made them travel to Germany.

“In Serbia there*s no work,” said Elvis Asani, a Roma from Serbia who is being sent back with his wife and children. “So we thought we go to Germany and work a little bit.”

“I go back, but we have no home,” Asani said when asked what he would do in Serbia. “Where shall we go with three kids?”

Since the center was opened in mid-September, the 15 staff processing asylum requests haven’t issued a single permanent residency permit, officials said. Meanwhile, 463 people were deported voluntarily and 170 were forcibly deported. Decisions are made within five to ten days.

“We don’t want to paint a discouraging picture, we want to paint a realistic picture,” Stefan Krug, an official with the regional government of Upper Franconia, said Monday.

“The mood ahead of Christmas is obviously a bit depressed,” he added. “But all in all it’s peaceful.”

Interior Ministry spokesman Dimroth said, unlike in previous years, none of Germany’s states have suspended deportations for the winter—and says federal authorities also see “no place for a halt to deportations.”