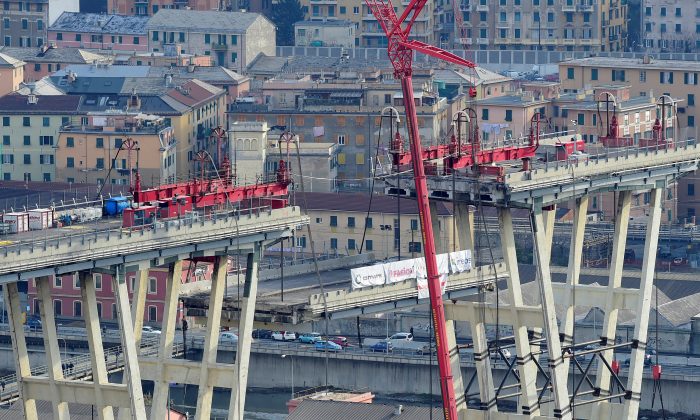 GENOA, Italy—When work started this month on dismantling the motorway bridge in Genoa that collapsed last August, killing 43 people, the Italian government said it was a symbol of revival.

But another site a short distance away is more representative of infrastructure development in Italy, with zero activity and the land undisturbed.

After 20 years of planning, bulldozers were due to start carving out a bypass around this northern port city in late 2018. Just as local officials thought they had cleared every bureaucratic hurdle, the government in Rome demanded a new cost-benefit analysis.

“We have the money, we have approval from everyone … Then a new government arrived and everything stopped,” Marco Bucci, Genoa’s center-right mayor, told Reuters.

“Bureaucracy, finger-pointing, politics, and litigation are the real problem here in Italy.”

Builders say the fate of the bypass is symptomatic of wider problems in Italy’s construction sector, where overly complex planning procedures have hobbled hundreds of new projects and slowed repairs.

The resulting crisis has pushed 120,000 building firms out of business in less than 10 years and weakened the eurozone’s third-largest economy, now in its third recession in a decade.

“While Italy is falling apart, thousands of companies and their employees are losing work because of this immobility,” said Gabriele Buia, president of national constructors’ association Ance.

Ance has a website detailing around 600 construction projects worth some 36 billion euros ($40.7 billion), including the Genoa bypass, that it says are blocked, more often than not because of suffocating bureaucracy.

After the right-wing League and anti-establishment 5-Star Movement formed a government last June, they promised to unravel red tape that has throttled Italian businesses.

But 5-Star also demanded cost-benefit analyses that have halted a number of projects, including the long-promised bypass and a high-speed Alpine rail link between Turin and the French city of Lyon on which work had already started.

The bypass review has yet to be completed, but a report this month on the so-called TAV rail line gave a resounding thumbs-down to the 20-billion-euro link, to dismay from business.

“The TAV is vital for the growth of the country,” Ance’s Buia told Reuters. “We have calculated that it would have created 50,000 jobs … By stopping work on it we are creating immediate damage for ourselves.”

Critics say the prolonged planning process makes it too easy for new administrations at both national and local level to unpick the work of their predecessors.

For projects costing over 100 million euros, it takes on average six years to get all the necessary permits from myriad public bodies, 1.3 years to award the contracts and then more than seven years to actually finish building.

“Why does it take more than a year to complete the tender process and why, if a company goes bust once work is underway, do you have to start the tender from scratch again? It is mad,” said Genoa’s Bucci.

Companies getting into trouble is a recurrent problem.

In the past eight months, Astaldi, Italy’s second-largest builder and CMC, its fourth-largest, have filed for creditor protection, while no. three firm Condotte filed for insolvency.

The government has promised to tackle one of the major bottlenecks—a building code that is designed to halt once-rampant corruption but has gummed up the system as an unwanted side-effect.

An overhaul promised by ministers has been delayed from November to March given the complexity of the changes and concerns they could help organized crime.