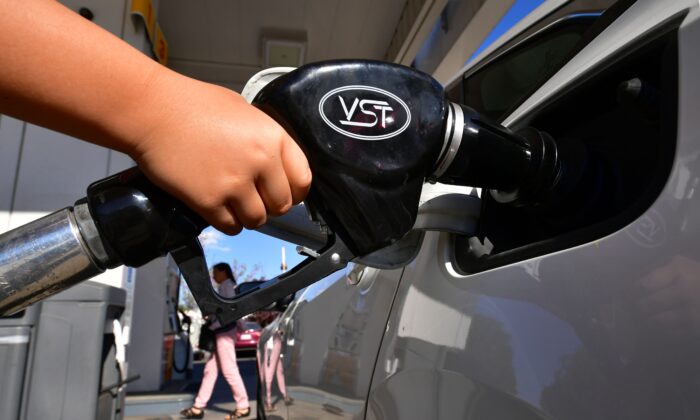 A child pumps gas for his father at a gas station in Los Angeles on April 9, 2019. (Frederic J. Brown/AFP/Getty Images)
AMERICA

The cheapest gas in the United States might be found in Salamanca, New York, with some drivers reporting prices as low as $0.62 per gallon.

GasBuddy analyst Patrick De Haan wrote on Twitter on Saturday that the 62 cents per gallon gas was spotted at a gas station in the town of around 5,000.

According to a screenshot obtained by The Drive, the low price was featured at Allegany Gas & Smokes in Salamanca, which is located inside the Allegany Indian Reservation. The nearby NAFCO gas station also was selling a gallon for 71 cents, the same report said.

An employee with NAFCO told The Drive that the low prices are the result of a pricing war because a new station, M & M Junction, opened in the area recently. The person said that M & M Junction’s owners have been dropping the prices below profitable levels, leading other stations to follow their lead.

The employee said that when the price dipped on Saturday, numerous people showed up with 55-gallon drums to hold gasoline.

GasBuddy as of Sunday afternoon showed that Allegany Gas & Smokes’s price apparently went back up to $0.96 per gallon, although The Drive reported that the 62-cent price is still active.

The low prices nationwide have been attributed to the CCP (Chinese Communist Party) virus pandemic, as demand for gasoline has plummeted as people are forced to stay home.

Gas prices dropped to a national average of $1.89 on April 9, plunging around 50 cents per gallon from a month ago, according to automotive federation AAA.

Last week, GasBuddy.com also reported that two stations in Wisconsin, the 63 Express in Hagar City and 35 Express in nearby Maiden Rock were selling a cash price for 79 cents per gallon, according to Fox News.