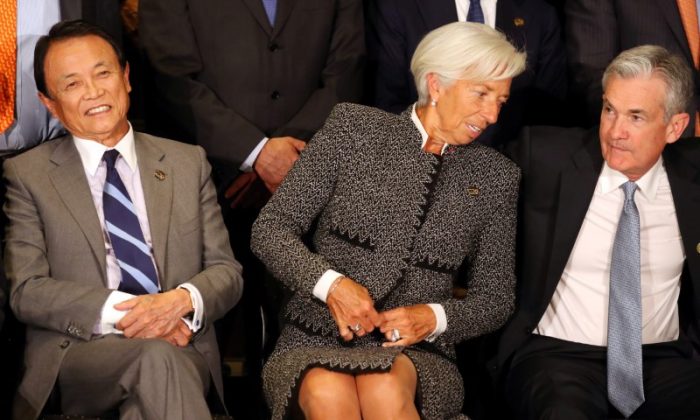 BUENOS AIRES —Finance ministers and central bankers from the world’s largest economies said on Sunday that heightened trade and geopolitical tensions risk derailing global growth, and called for greater dialogue, according to the final communique of a G20 meeting.

The weekend, talks in Buenos Aires come at a time of escalating rhetoric in the trade conflict between the United States and China, the world’s largest economies, which have so far slapped tariffs on $34 billion worth of each other’s goods.

U.S. President Donald Trump raised the stakes on Friday with a threat to impose tariffs on all $500 billion of Chinese exports to the United States unless Beijing agrees to major structural changes to its technology transfer, industrial subsidy and joint venture policies.

The communique noted that global economic growth was robust and unemployment was at a decade low. However, it warned that growth was becoming less synchronized among major economies and downside risks over the short and medium-term had increased.

The ministers reaffirmed the conclusions from G20 leaders at their most recent summit in Hamburg last July, when they emphasized that trade was an engine of global growth and that multilateral trade agreements were important.

“We … recognize the need to step up dialogue and actions to mitigate risks and enhance confidence,” the communique said.

The language marked an incremental toughening from the communique issued at the previous ministerial meeting in March, which had only noted that the leaders “recognize the need for further dialogue.”

“The latest language suggests a great deal of urgency about resolving these issues,” Australia Treasurer Scott Morrison said in an interview, adding that the ministers had made it clear in the discussion that they were concerned about “tit-for-tat measures” and that open trade was the goal.

“We were in mutual listening mode and I hope that this is the beginning of something,” European Commissioner for Economic and Financial Affairs Pierre Moscovici told reporters on Sunday, referring to the G20 negotiations. “But still the positions are not similar.”

U.S. Treasury Secretary Steve Mnuchin has sought to use the meeting to woo Europe and Japan with the offer of free-trade deals, as Washington tries to gain leverage with allies in its dispute with China.

European Council representative to the G20 Hubert Fuchs said the United States’ removal of tariffs was not a necessary precondition for trade talks to begin and he welcomed the candid approach adopted by Mnuchin at the meeting.

Canadian Finance Minister Bill Morneau said Mnuchin had over the weekend expressed a goal for all G7 countries to “drop all tariffs, non-tariff barriers and subsidies,” which Morneau characterized as a “great idea” and an “aspirational target” but difficult to execute.

The communique emphasized that structural reforms were needed to enhance growth, and reaffirmed commitments from March’s ministerial meeting to refrain from competitive devaluations that could have adverse effects on global financial stability.

By Daniel Flynn and Luc Cohen