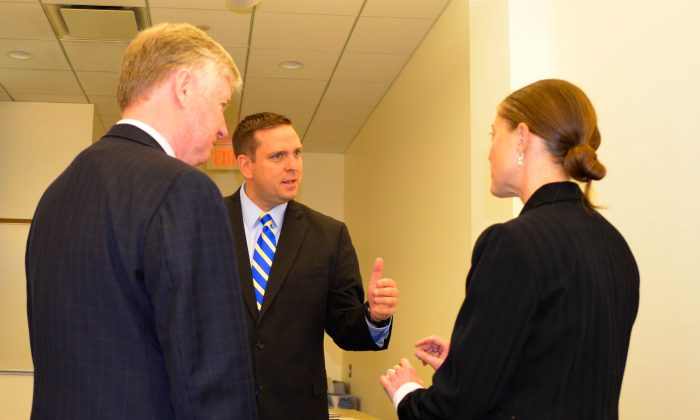 FTZ 37: Another Tool in the County’s Pocket for Economic Development

GOSHEN—A committee met for the first time on Dec. 1 to revive the county’s foreign trade zone board, which has been dormant since 2009. County Executive Steve Neuhaus directed Harry Porr, the county’s director of operations, to get the ball rolling.

The county invited staff member Elizabeth Whitman, from the Commerce Department’s Foreign Trade Zone Board, to bring the committee up to speed.

Porr said companies have been knocking on the county’s door and asking what a foreign trade zone can do for them. Now the county can respond in a positive way. “Today we have a newly formed board,” he said.

The 13-member committee included present and former legislators, county officials and attorneys, and other interested parties. Alan Seidman, former chairman of the county legislature, agreed to chair the committee. Porr said more may be added.

We expect this to be a very busy board.
— County Executive Steve Neuhaus

Neuhaus said FTZ 37, the designation for the county’s foreign trade zones, has not done much for economic development in the last 20 years. “Many of the members that were on the board of the foreign trade zone had actually passed away.”

Neuhaus wants to change that. “We expect this to be a very busy board.”

Whitman familiarized the committee with FTZ basics. “Foreign trade zones are places where you can bring imported merchandise into the U.S. prior to formal customs entry without a duty payment.”

A place designated as a FTZ can do a lot with imported merchandise, Whitman said. “You can store things in a FTZ, you can export them, you can manufacture them. You can even comingle foreign and domestic status merchandise. The bottom line is there are savings here for companies.”

Some activities and products are not allowed. Retail is not permitted in a zone. “These are not duty free shops,” Whitman said. Anything subject to tax law—alcohol, tobacco, and firearms—are also not permitted.

The bottom line is there are savings here for companies.
— Elizabeth Whitman, Foreign Trade Zone Board

With no formal customs entry, a company can store items, manufacture products, then re-export a product and never pay duties. With high value merchandise such as textiles a company can defer payment of duties.

Another benefit is not paying for scrap or waste that occurs during the import of goods. Whitman said a company imported glassware to the zone and avoided duty on broken pieces.

FTZs are focused on bringing manufacturing and jobs back to the United States. “What we want them to do is do activity here in the U.S. that for customs reasons might otherwise occur abroad.”

You can now bring the zone to the company.
— Elizabeth Whitman, Foreign Trade Zone Board

The Foreign Trade Zone board in Washington makes it as easy possible for a company to use FTZs. Application is a two stage process. The company first has the board designate the site. Once in place, a CBP (Customs and Board Protection) activates the site.

Even equipment used to build a manufacturing facility can benefit from a FTZ. “Any production equipment brought in has zone status, and the duty can be deferred again until it actually goes into use.” Neuhaus said that Pratt & Whitney in Wallkill is building another facility and importing production equipment from Germany.

The FTZ board makes use of what is called an alternative site framework to bring FTZ designation to locations where a company is ready to use FTZ procedures.

Applying for an FTZ designation can be as easy as drawing the FTZ area on a map, giving site information and the company’s activity, and paying an application fee of about $5,000.

U.S. FTZs are secure areas, and very different from trade zones in other countries, where they are known as free trade zones. “In other countries FTZs are almost free-for-alls,” Whitman said. “Nobody knows what’s going on. Different rules apply—immigration, tax law, or labor laws may not apply.”

In the United States, it’s all about timing and not what country it is in. When merchandise enters, the United States makes it a customs procedure. “It’s coming into the territory of the U.S.. It’s not on foreign soil.”

Historically, FTZs were meant for incoming shipments when it was authorized in 1938. Whitman said that congress envisioned that only the major U.S. seaports would use it. “They would store some merchandise until it was shipped on.”

That changed in 1950 when manufacturing was allowed in zones. In 1957, subzones were created—”revolutionary because the zone did not need to be created at an airport or seaport. The zone could be where the company was. You could now bring the zone to the company.”

Nationally about $800 billion in merchandise comes into a FTZ each year and $99 billion goes out in exports. There are zones in all 50 states and Puerto Rico.

FTZ 37 was authorized in 1978, one of the first in the country and overseen by the local CBP in Newark. FTZ 37 has two magnet sites, four usage driven sites, and several subzones.

FTZ 37 enjoys a favorable position, unique in the state. It can designate a zone anywhere in the state because of special language written into the law. The federal board has allocated nearby Rockland and Dutchess counties as part of its service area.

Orange County has many methods for bringing jobs and business home and FTZ 37 “is one thing in your economic development tool bag that can lead to savings for companies,” Whitman said.