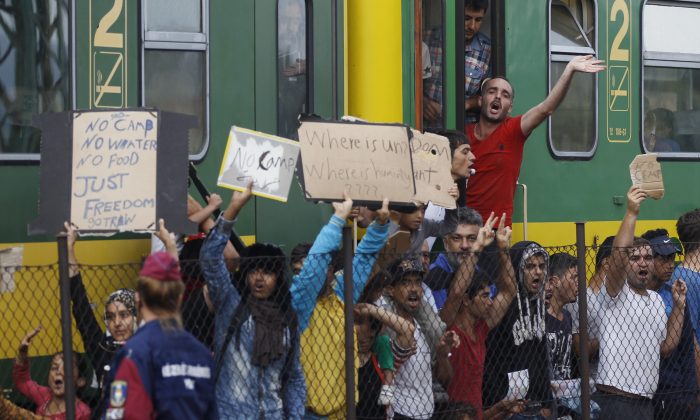 BUDAPEST, Hungary—Hundreds of frustrated refugees stuck at Budapest’s Keleti train station gathered up their belongings Friday and vowed to make their way to Vienna on foot. But the protest was short-lived — after whistling and marching around the station they settled back down to continue a wait that has dragged on for days.

Meanwhile, a standoff continued for a second day at the station in Bicske, a town northwest of Budapest that holds one of the country’s five camps for asylum seekers.

The refugees are trying to avoid the centers because they don’t want to pursue asylum claims in Hungary, which is economically depressed and much more likely than Germany to reject their claims.

Hundreds of people sat on a train being held at Bicske, some with tickets they had purchased to Berlin or Vienna.

“The situation is so bad. We have so many sick people on the train. We have pregnant women, no food, no water,” said Adnan Shanan, a 35-year-old from Latakia, Syria, who said he was fleeing war in his homeland.

“We don’t need to stay here one more day. We need to move to Munich, to anywhere else, we can’t stay here. We can’t wait until tomorrow. We need a decision today, now,” Shanan said.

At Keleti, the capital’s main international railway station, frustration rose and conditions grew more squalid as 3,000 people remained camped out as they wait for a decision by Hungarian authorities on their fates. Some families pitched tents, with children playing nearby. Some held up signs voicing their desire to go to Germany or for the United Nations to intervene.

For days Hungarian authorities have been preventing refugees from Syria and elsewhere from traveling to Austria and Germany. Prime Minister Victor Orban has taken a strong stance against migrants, building a barbed wire barrier on the border with Serbia and vowing Friday not to let Europeans become “a minority in our own continent.”

Shanan, who bears scars on his arms that he says are from the fighting in Syria, contended that authorities were denying them food and water, but Associated Press reporters saw police and civilian volunteers trying to deliver both to the train — and it getting thrown back out the windows.

Hungary Opens Door to Trains for Migrants, but Only to Camps

In Geneva, the UN refugee agency said Friday that nearly 5,600 people crossed from Greece to Macedonia a day earlier. That’s roughly double the already high 2,500 to 3,000 per day in recent weeks.

“That is a dramatic number,” said UNHCR spokeswoman Melissa Fleming, saying it was the highest she’s heard yet.

Earlier Friday, Antonio Guterres, the head of the UN refugee agency, issued a statement urging the EU to create a “mass relocation program … with the mandatory participation of all EU member states” for would-be recipients who clear a screening process.

He said a “very preliminary estimate” would be for the creation of at least 200,000 places to be added across the bloc.

The UN comments came a day after a round of recriminations among EU leaders. Orban has said the human wave is a German problem, but German Chancellor Angela Merkel said the obligation to protect refugees “applies not just in Germany, but in every European member.”

Orban reiterated on Hungarian state radio Friday his determination to stop the refugees.