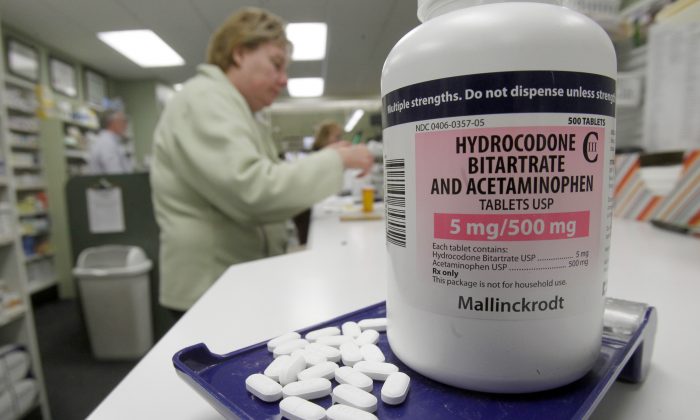 Hydrocodone pills, also known as Vicodin, at a pharmacy in Montpelier, Vt., on Feb. 19, 2013. Drug overdose deaths rose for the 11th straight year, federal data show, and most of them were accidents involving addictive painkillers despite growing attention to risks from these medicines. As in previous recent years, opioid drugs—which include OxyContin and Vicodin—were the biggest problem, contributing to 3 out of 4 medication overdose deaths. (AP Photo/Toby Talbot)
Mind & Body

In the early years of my clinical practice as a psychologist treating heroin users, I commonly saw adolescents and young adults using heroin as their first drug. A typical client was a male in his mid-teens, perhaps a runaway, someone living in foster care, or someone who had been in and out of juvenile detention or who had dropped out of school and was court-ordered into treatment.

When we saw older heroin users in treatment, it was considered unusual. That’s not the case anymore.

According to a new study, 50- to 59-year-olds are the largest age group in opioid treatment programs. Another recent study found that drug overdoses were a factor in the rising mortality rate for non-Hispanic, white, middle-aged Americans.

According to reports in the Journal of the American Medical Association, the new generation of heroin users is older, predominantly white, and living outside of inner-city urban neighborhoods. And the average age of first heroin use has increased from age 16 to over 23 and from equal numbers of white and nonwhite users to about 90 percent white.

Why have the demographics of heroin use changed so much? For that, we can look to the dramatic increase in prescriptions for opioid painkillers such as OxyContin or Vicodin. These medications can treat acute and chronic pain, but can also lead to addiction. And when people can’t access pills anymore, heroin can provide a cheaper and more powerful alternative.

Overdose Deaths Are Up

The incidence of drug overdoses is five times higher today than 35 years ago. In 2009, drug-overdose deaths passed motor vehicle deaths for the first time. And prescription pain medications, specifically opioids, have increasingly accounted for the majority of drug-overdose deaths.

From 1999 to 2010, drug-overdose deaths from opioid pain medications increased from about 30 percent to over 60 percent, and in 2010, the most recent year that statistics are available, deaths from opioids far exceeded deaths from any other legal or illegal drug class.

The incidence of drug overdoses is five times higher today than 35 years ago. In large part, this increase stems from a change in how doctors treat pain that began in the 1990s.

In large part, this increase stems from a change in how doctors treat pain that began in the 1990s. At that time, I was working in a large, urban hospital system, and both researchers and clinicians were advocating aggressive and proactive treatment for pain. Restrictions on prescribing opioids were lessened, and physicians were being encouraged to more adequately treat their patients’ pain.

Prescriptions for opioids have gone up dramatically. The Centers for Disease Control and Prevention (CDC) reports that as recently as 2012, over 250 million prescriptions for pain relievers were written in the United States per year, representing a 300 percent increase in the previous 13 years.

With the increased use of prescription opioids, there was a commensurate increase in overdoses.

Unfortunately, with the increased use of prescription opioids, there was a commensurate increase in overdoses.

Why Are More Older People Becoming Addicted to Painkillers?

The National Institutes of Health reports that chronic pain patients tend to be older, that their pain is of longer duration, more often accompanied by other conditions and more likely to be treated. For patients in severe pain, opioids are often the only effective treatment.

There are three primary effects of opioid use: analgesia (pain relief), sedation, and euphoria. Patients experience the three differently, depending on their reasons for using the drug. Some people may become dependent on opioids, and some will become addicted—and they are not the same thing.

Doctor Taking Opioid Overdose Problem Into His Own Hands

Dependence is defined as having withdrawal symptoms when the drug is stopped, while addiction is the compulsive use of the drug for a state (euphoria) other than pain relief. The compulsion becomes so consuming that the addict’s life centers around seeking and obtaining the drug, using it, withdrawing from it, and seeking it again, to the neglect of all other aspects of life.

While opioids carry the risk of addiction, not all patients will become addicted. For example, patients being treated with opioid medications after surgery are not likely to become addicted, regardless of the dose. That is because for the postsurgical patient, the sedative and analgesic effects of the medication override the euphoric effect.

On the other hand, individuals who focus on the state of euphoria (the “high”) are the ones more likely to become addicted.

How Does Abuse Start?

As clinical psychologist working with pain patients over the years, I was able to observe distinct patterns of use. Some people were able to stop the pain relievers with relative ease after recovery. Others might start taking opioids for nonmedical reasons.

Here’s a typical example: A patient who had been prescribed Vicodin after back surgery might need fewer pills after a while to manage the pain, but was afraid to tell the doctor (“What if the pain comes back?”), so the prescriptions continued. By the time recovery was complete, the patient had a stockpile of pills.

One day after work, this patient came home with a headache from a stressful day. In the medicine cabinet was the leftover Vicodin. A couple of pills, and the patient experienced relief not only from the headache but from the stress of the day. The next time, taking the pills was easier, until before long, the patient was addicted and seeking more. This patient, like many who become addicted, did not intend to start abusing the drug.

Eventually, the prescriptions stopped, but the addiction did not, and many of these patients either began to doctor-shop, a term that describes frequent changes in doctors or having multiple doctors in order to obtain prescriptions, or they turned to illegally obtained drugs, prescription drugs or street drugs such as heroin.

Heroin is cheap. A single 80 milligram OxyContin pill can cost between $60 and $100 on the street, compared to $45–$60 for a single purchase of multiple doses of heroin. Heroin also has a larger effect, depending on the purity and method of ingestion, and doesn’t have the ceiling effect that controlled prescriptions have.

Heroin is now rapidly replacing Vicodin, Oxycodone, and other prescription opioid painkillers as the drug of choice for nonmedical use by a growing population of users.

And there are reports that drug dealers may encourage drug seekers to use heroin if they cannot afford prescription medicines. As more older people become addicted to opioids, more may turn to heroin.

A study of heroin users conducted by researchers at Washington University in St. Louis, Missouri, reported that typical heroin users in their study were white, middle-aged, and equally divided among males and females.

When asked about switching from prescription pain medications to heroin, many reported that they felt forced to switch because of lack of availability of the prescription drugs.

In an effort to curb the rising rates of addiction to prescription opioids and the associated costs in lives, the U.S. Drug Enforcement Administration (DEA) has imposed restrictions on the prescribing of hydrocodone-combination products like Vicodin.

These include strength, number of doses, frequency of prescription, and method of delivering new prescriptions.

While attempting to curb the nonmedical use of the opioids, these policies are also limiting access to pain treatments for the legitimate pain patient. However well-meaning these new laws are, it remains to be seen whether or not they will force increased numbers of pain patients to the streets and street drugs for relief.

In the meantime, physicians would do well to learn about opioid use as well as engage in drug screening and monitoring, pill counting, and the use of other pain-management protocols, such as behavioral counseling. That would be an important beginning of the end of the drug-addiction cycle.

Jeannie D. DiClementi is an associate professor of psychology at the Indiana University–Purdue University Fort Wayne. This article was previously published on TheConversation.com