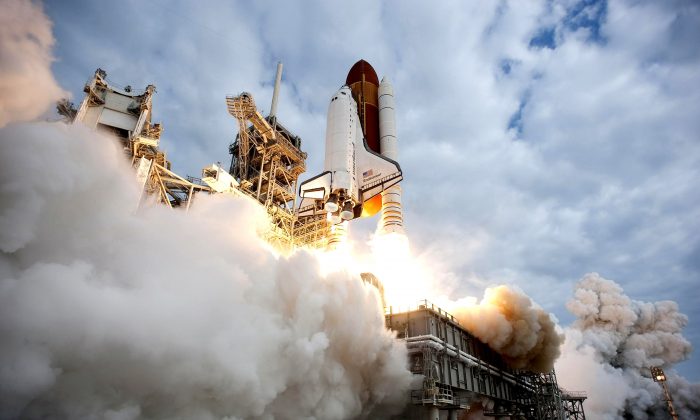 Earlier this month Amazon billionaire Jeff Bezos talked candidly with NBC News about the desirability of so-called space tourism, and his startup “space” company Blue Origin. Of course everyone’s heard of Virgin Galactic, Sir Richard Branson’s not so far out space tourism disruption, but what of sure fire outer limits exploration privatized? As the imminent astronomer, astrophysicist, cosmologist Carl Sagan once said:

“Somewhere, something incredible is waiting to be known.”

Jeff Bezos and Sir Richard Branson are the two names most often associated with the fun and fantastic science of people taking a little jaunt into the stratosphere, even into orbit. However, other entrepreneurs have even more far reaching plans for exploration into the eternal “out there,” outside Earth’s gravitational pull. Elon Musk, Larry Page, Eric Schmidt, Naveen Jain, Robert Bigelow, even Ross Perot Jr., these and many more seem focused on boldly going where others have not. Here’s a look at some of the more ambitious and interesting (even starry) adventurous ventures they’ve planned.

Brought to you by the man who created the now ultra successful Tesla automobile alternative, Elon Musk, Space X is essentially the quintessential point of innovation needed for the start of any extraterrestrial ramp up to “next” – rocket dynamism and disruptive technology. If you think about it, from which engineering perspective will interstellar flight come? The rocket ship has to be the first step, even if “ships” are not actually the way. Space X, begun back in 2002 in partnership with rocket propulsion engineer Tom Mueller, is ambitious indeed.

The mission objective of Space X is to enable a feasible colonization of Mars. Once you’ve let that sink it, it’s important to realize that Musk’s company has already achieved many monumental space “firsts” including: being the 1st private company to launch a liquid fueled orbital rocket (Falcon 1), first to launch into orbit and recover a spacecraft (Falcoln 9), and first to send a spacecraft to the International Space Station (Dragon), among other firsts. In collaboration with both NASA and the US Department of Defense in some cases, Space X shows superb potential for accomplishing mission Red Dragon in the not too distant future. The long awaited, much talked about and theorized manned mission to Mars using Falcon Heavy rocket and Dragon capsule technologies.

A Nearby “Dune” Potential

If the “spice” was the power up necessity in the sci-fi adventure Dune, dwindling resources here on planet Earth will soon demand alternatives. Another of the innovator-investor types involved, Eric Anderson told SPACE.com (speaking of asteroids):

“They’re just so valuable, and so easy to reach energetically. Near-Earth asteroids really are the low-hanging fruit of the solar system.”

The video below does a good job of explaining how this company intends to not only turn a profit from the sale of minerals to be mined from asteroids, but also how the company will create an extraterrestrial form of corporate altruism too. Tongue in cheek aside, your typical philanthropic sounding “save Earth” dogma, however capitalistic in its real intent, does portray a problem solve for humankind. Going down the list of team members, and of investors, one would be wise to put money down based on past performance. The aforementioned Richard Branson is involved spiritually and financially, Ross Perot Jr. too, and a list of physicists and interstellar/stellar names across the dialectics weigh in here. Apparently landing on asteroids and digging for “gold” is just not that farfetched any more. All of this leads us to maybe the most feasible of feasible possibilities exploration wise…

To the Moon Alice!

Who from the so called Baby Boomer Generation does not remember those famous word’s; One of these days Alice, pow, zoom, to the moon?” The moment of consternation and friction in between Honeymooners characters Ralph Kramden and his wife Alice centered on what was really, an eternal honeymoon, or more succinctly, the eternal friction in between polar opposites. The same “harmony” with which the Earth and Moon have existed in for eons, perhaps this is what led World Innovation Institute Founder Naveen Jain to instigate the aptly named Moon Express?

If one considers all logical alternatives to getting out there in space, or even harvesting from and bringing too Earth rare or needed elements from afar, no place seems more hospitable than our own Moon. If asteroid mining is feasible at all, our closest and biggest resource is just a nominal 238,900 miles away. For many experts, including the “who’s who” on Jain’s team (like Co-founders Barney Pell and Bob Richards), if we can’t do it on the moon, the rest of the galaxy is a no go. With the use of ultra-high tech robotics, Moon Express is focused on unmanned exploration and the actual realization of useful explorative business. In a show of feasibility and progress, just this past December Moon Express revealed their breakthrough MX-1 Commercial Luna Lander. To quote from their mission statements:

“We believe it’s critical for humanity to become a multi-world species and that our sister world, the Moon, is an eighth continent holding vast resources than can help us enrich and secure our future. The Moon is unique in that its surface has remained relatively constant over billions of years.”

Taking Flight – The Only Way to Fly

I cannot discuss these technological crossroads we continue to intersect without mentioning Carl Sagan. As a kid, I remember so vividly watching the Apollo launches, even some Gemini ones, from central Florida where the flame of a Saturn V could be seen 100 miles away. Now, half a century later, I am compelled to think back to Carl Sagan’s now famous “Pale Blue Dot” revelation. Regardless of the underlying intent of these innovators, the ultimate ramifications lead us humans beyond this “lonely speck” of supposed loneliness. As Sagan suggested, for all we know there is no great rescuer out there to come and save us form the bleak eternity of darkness. It is, my friends, up to us. So we should applaud these seemingly mad investments, even if for the realizations that later come because of them. We have no choice but to take flight. Or not.

To the Moon Alice!