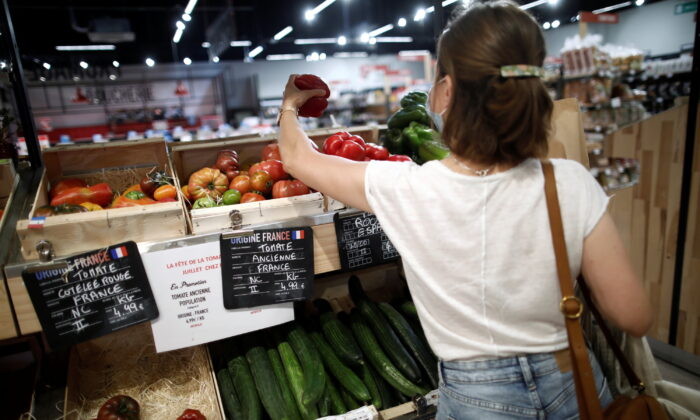 A customer shops for vegetables at a Naturalia organic foods grocery store operated by Casino Group, following the outbreak of the COVID-19, in Bretigny-sur-Orge, near Paris, on July 30, 2020. (Benoit Tessier/Reuters)
Inflation

The INSEE statistics agency said consumer prices rose 0.5 percent in April, for an annual rate of 5.4 percent, the highest since France began using European Union methodology in the early 1990s. Inflation had been 5.1 percent in March.

The increase, boosted by 26.6 percent yearly increase in energy prices but also higher prices for services and manufactured goods, beat average expectations in a Reuters poll of 17 economists for inflation to remain unchanged.

The surge is bad news for Macron as he prepares for legislative elections in May, having won a second term this month after a campaign that focused on the rising cost of living as prices outstrip wages.

Macron’s government has so far managed to keep inflation lower than any other euro zone country apart from Malta thanks to a 25 billion euro ($26 billion) package to help consumers cope with rising prices, largely through caps on energy price increases.

The head of the hardline CGT union, Philippe Martinez, told Reuters: “The government has got to deal with the purchasing power problem by raising wages.”

Macron signalled during his campaign that he wanted to deliver an anti-inflation law this summer that would increase handouts for low-income households to cope with rising fuel and food prices, as well as raise pensions.

With inflation eroding households’ purchasing power, France’s economic growth unexpectedly ground to a halt in the first quarter due to a sharp drop in consumer spending, INSEE said in a separate GDP report.

In its monthly inflation report, INSEE said annual inflation as measured by France’s national consumer price index rose to 4.8 percent in April from 4.5 percent in March, hitting its highest since November 1985. Economists polled by Reuters had expected 4.5 percent on average in April.

The national index is more closely followed in France, while the EU-harmonized index is used abroad to compare inflation rates among countries using the euro.