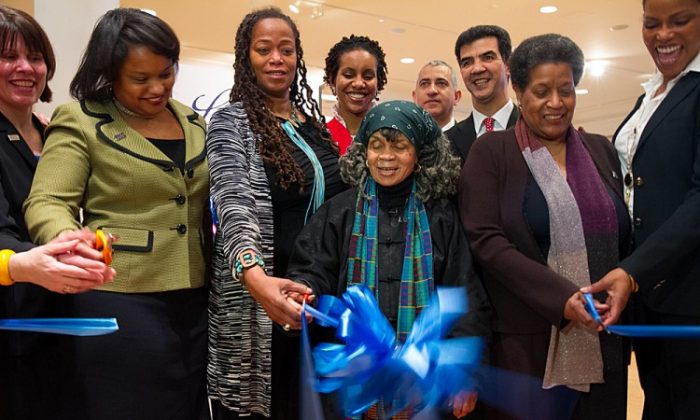 Myrlie Evers-Williams, widow of Medgar Evers who was killed by white supremacist Brian De La Beckwith, kept the case alive for 30 years before Beckwith was tried and sentenced by a multiracial jury. (Benjamin Chasteen/The Epoch Times)
US

The Freedom’s Sisters exhibit, highlighting the courageous contributions of 20 African-American women, opens Feb. 4 at The Malcolm X & Dr. Betty Shabazz Memorial and Educational Center. It is a collaboration between the Smithsonian Institution Traveling Exhibition Service (SITES) and the Cincinnati Museum Center.

Freedom’s Sisters celebrates women who played a prominent role in standing up and fighting for equal rights for all Americans. They include Harriet Tubman and Dorothy Height, along with Myrlie Evers-Williams, widow of civil rights activist Medgar Evers, Dr. Sonia Sanchez, and C. Delores Tucker.

The exhibit aims to educate the public about not-so-well-known facets of American history. Tonya Matthews, vice president of museums for the Cincinnati Museum Center, noted that she wasn’t that surprised when her students said they didn’t know too much about these events. “We will teach, we will teach, we will teach,” declared Matthews, explaining that her organization will do whatever is needed to get the public educated about these significant historical figures.

The Freedom’s Sisters exhibit started in Cincinnati and has been on tour in the United States since 2008. Its last scheduled stop is New York City. The exhibit will be open 10 a.m.-5 p.m., Monday through Saturday, until April 22. Admission is free.