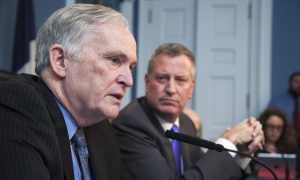 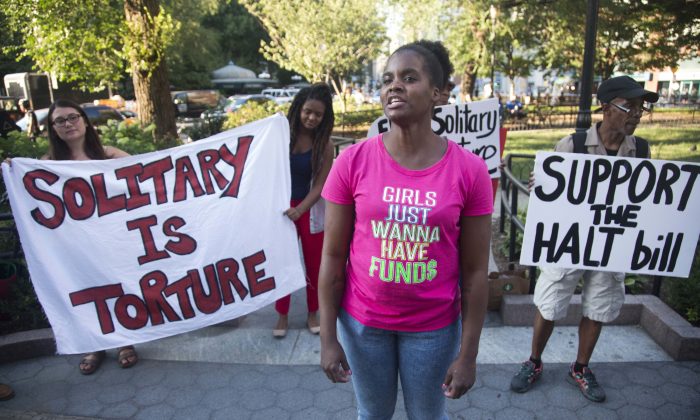 Candie Hailey, center, speaks during a monthly rally calling for the end of solitary confinement in New York, on July 23, 2015. (AP Photo/Bebeto Matthews, File)
US

NEW YORK— Candie Hailey spent more than three years in a New York City jail, most of it in solitary confinement, before a jury decided she was innocent last year and set her free. Now, prosecutors say she still hasn’t been punished enough.

The 32-year-old woman went on trial Monday on criminal charges stemming from a confrontation with guards at the city’s Rikers Island jail in 2013.

Hailey’s chaotic Rikers stint and subsequent struggle to return to society was documented earlier this year by The Associated Press. She faces a felony charge of criminal mischief for breaking a chair used to scan inmates’ body cavities for contraband.

Hailey, who was diagnosed with borderline character disorder, mood disorder and anti-social personality disorder, could face up to seven years in prison if convicted. She also faces misdemeanor counts of harassment, obstructing government administration and assault.

“This all makes me feel like there is no such thing as criminal justice,” Hailey said Monday during a break in court action.

The trial, which will be decided by a judge rather than a jury, opened with testimony from a jail captain who testified that she heard, but didn’t see, Hailey break a piece off an apparatus called a “BOSS chair” while her cell was being searched.

Hailey told the AP the chair was already broken when she got to the room.

“Who knows who really broke it,” she said.

Her lawyer, Patrick Higgins, questioned how she could have damaged the device while her hands were covered with protective mitts designed to keep her from grasping anything.

Of her first 29 months in jail, Hailey served about 27 of them in 23-hour isolation for breaking jailhouse rules and was frequently involved in confrontations and scuffles with guards. She regularly hurt herself by banging her head against her cell wall or cutting at her wrists with broken light fixtures. And at least eight times during her time in solitary, she was hospitalized for suicide attempts that included swallowing a hair remover product.

Criminal justice experts have said Hailey’s defiance was a common reaction to the continued use of solitary confinement for difficult inmates, especially those with mental health problems.

In a letter, Hailey’s supporters have urged Clark to exercise restraint and dismiss the charges against Hailey in the interest of justice.

“Here is an opportunity to right a wrong,” the letter states. “She should not be prosecuted for incidents that occurred during an ordeal that the city now agrees should not be practiced in our jails.”

Hailey was initially jailed in 2012 after a group of women accused her of stabbing a baby during a fistfight. Hailey said she was the victim in the case. The three women robbed her, she said, and the child was injured when one of them knocked over a stroller during the melee. The infant suffered a hairline skull fracture and needed three stitches.

Since her release, Hailey has struggled to find stability, bouncing between shelters, friends’ couches and sometimes the subway to sleep. She lost her public housing apartment and is trying to regain custody of her two children.