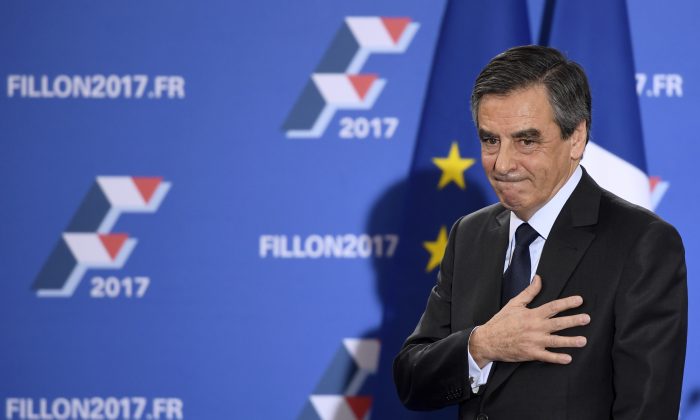 French member of Parliament and candidate for the right-wing primaries ahead of France's 2017 presidential elections, Francois Fillon gestures as he delivers a speech following the first results of the primary's second round on November 27, 2016, at his campaign headquarters in Paris. France's conservatives held final run-off round of a primary battle on November 27 to determine who will be the right wing nominee for next year's presidential election. / AFP / Eric FEFERBERG (Photo credit should read ERIC FEFERBERG/AFP/Getty Images)
Europe

PARIS—There’s a saying in Belgium: “when it’s raining in Paris, there’s a drizzle in Brussels,” implying that the influence of political tendencies going on south of the border is never far away.

Of late, the weather gods seem to have extended this consistency across the pond: three weeks after Donald Trump’s victory of the U.S. presidential election, the nomination of the Republican candidate for the French presidential election has been won by an outsider, alternately dubbed by his rivals as “ultra-liberal”, “Conservative”, “Thatcherian”, or “Mr. Nobody.”

François Fillon, the former Prime Minister of France, called his victory “substantial”, and rightfully so: of the 4 million French who voted at this primary—a greater attendance than during the 2011 Parti Socialiste primary—68 percent have voted for Fillon. This seems to put the Republican candidate at the center of the chessboard for the next French elections.

Up until the first round of the primaries, the race was headed by Alain Juppé, who headed the Union for a Popular Movement Party (since renamed to “Les Républicains”) after former President Nicolas Sarkozy lost in an earlier round of voting. Fillon’s surprising emergence during that first round marked the start of a fierce opposition by both left- and right-wing adversaries.

The conservative statesman’s landslide final victory on Nov. 27, however, leaves the Republicans with no choice but to quickly form ranks, to face a left in disarray, and an extreme right that senses opportunity.

“What unites us is so much greater than what separates us. That is why tonight I reach out to all those who want to rebuild our country,” Fillon said on the evening of his inauguration.

Drawing clear analogies with the U.S. elections, Maxime Tandonnet, author of “History of the Presidents of the Republic”, stated: “the result is above all that of a popular revolt against the political and media elites, a response of the nation to the feeling that a mediatized upper class wants to impose its way of seeing, thinking, and voting.”

Despite being largely underreported since the start of his campaign, Fillon was able to foil the expected match between Nicolas Sarkozy and Juppé, and trump the prognostics cast by the mainstream media.

The program and personality of Fillon seem to have been essential in the choice of primary voters. Fillon has the image of an honest politician who knows his topics well and embodies a certain idea of ​​France that is both humanistic and liberal.