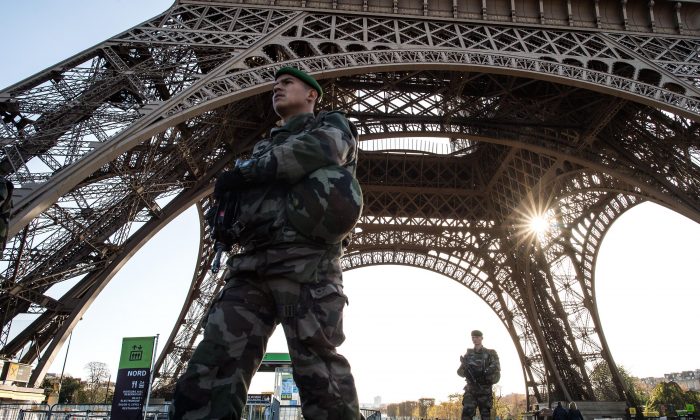 PARIS—France made an unprecedented demand for its European Union allies to support its military action against the Islamic States (ISIS) as it launched new airstrikes on the extremists’ Syrian stronghold, days after attacks in Paris linked to the group killed at least 129 people.

France invoked a never-before-used article of the EU’s Lisbon Treaty obliging members of the 28-nation bloc to give “aid and assistance by all the means in their power” to a member country that is “the victim of armed aggression on its territory.”

French Defense Minister Jean-Yves Le Drian said EU partners could help “either by taking part in France’s operations in Syria or Iraq, or by easing the load or providing support for France in other operations.”

The Paris attacks on Friday, claimed by ISIS, have galvanized international determination to confront the extremists.

Hollande has said the victims came from at least 19 nations, and the international community, led by the U.S. and Russia, must overcome their deep-seated divisions over Syria to destroy ISIS on its home turf.

U.S. Secretary of State John Kerry flew to France as a gesture of solidarity and met Hollande and Foreign Minister Laurent Fabius on Tuesday.

Standing with Hollande at the Elysee Palace, Kerry said the carnage in the French capital on Friday, along with recent attacks in Egypt, Lebanon and Turkey, made it clear that more pressure must be brought to bear on the Islamic extremists.

Kerry said, “we have to step up our efforts to hit them at the core where they’re planning these things and also obviously to do more on borders in terms the movement of people.”

Earlier, he told U.S. Embassy staff Friday’s attacks were an assault on civilization and common decency.

“This is just raw terror,” he said, vowing that the campaign against ISIS will succeed. “We will end the scourge of Daesh,” he said, referring to the group by its Arabic acronym.

Addressing lawmakers Monday after France observed a minute’s silence to honor the dead and the 350 wounded, Hollande said “Friday’s acts of war were decided and planned in Syria.”

“They were organized in Belgium and perpetrated on our soil with French complicity with one specific goal: to sow fear and to divide us,” Hollande told parliament in a rare joint session convened at the Palace of Versailles.

Hollande said Syria has become “the biggest factory of terrorism the world has ever known and the international community is still too divided and too incoherent.”

French and other Western intelligence agencies face an urgent challenge to track down the surviving members of the three ISIS units who inflicted the unprecedented bloodshed in France and, perhaps more importantly, to target their distant commanders in ISIS-controlled parts of Syria.

A French security official said anti-terror intelligence officials had identified Abdelhamid Abaaoud, a Belgian of Moroccan descent, as chief architect of the attacks on a rock concert, a soccer game and popular nightspots in one of Paris’ trendiest districts.

The official cited chatter from ISIS figures that Abaaoud had recommended a concert as an ideal target for inflicting maximum casualties, as well as electronic communications between Abaaoud and one of the Paris attackers who blew himself up.

The official spoke on condition of anonymity to discuss the sensitive investigation.

Abaaoud came to public attention last year by boasting in an ISIS propaganda video about his pride in piling the dead bodies of “infidel” enemies into a trailer. Anti-terror agencies previously linked him to a series of abortive shooting plots this year in Belgium and France, including a planned attack on a passenger train that was thwarted by American passengers who overpowered the lone gunman.

Interior Minister Bernard Cazeneuve said Tuesday that police carried out 128 police raids overnight, as he conceded that “the majority of those who were involved in this attack were unknown to our services.”

Police have seized a Kalashnikov assault rifle, three automatic pistols and a bulletproof vest from a suspected arms dealer with jihadist sympathies, and a rocket launcher and other military-grade gear from his parents’ home.

But police have yet to announce the capture of anyone suspected of direct involvement in Friday’s slaughter. Seven attackers died—six after detonating suicide belts and a seventh from police gunfire—but Iraqi intelligence officials told The Associated Press that its sources indicated 19 participated in the attack and five others provided hands-on logistical support.