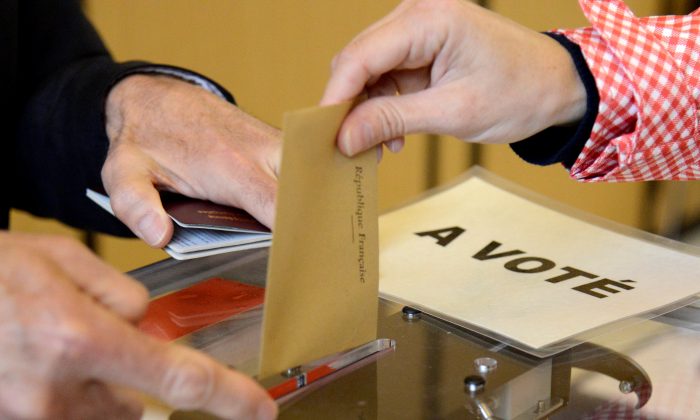 A French citizen living in the United States drops her ballot into a box as she votes in the French presidential run-off between Emmanuel Macron and Marine Le Pen, at the French Embassy in Washington on May 6, 2017. (REUTERS/Mike Theiler)
International

PARIS—France sought to keep a computer hack of front-runner Emmanuel Macron’s campaign emails from influencing the outcome of the presidential election, with the electoral commission warning on Saturday that it may be a criminal offense to republish the data.

Polls have been predicting that Macron, a former investment banker and economy minister, is on course for a comfortable win over Marine Le Pen in Sunday’s election, with the last surveys showing his lead widening to around 62 percent to 38.

“We knew that this kind of risk would be present during the presidential campaign, because it has happened elsewhere. Nothing will be left without a response,” French President Francois Hollande told French news agency AFP.

The election commission, which supervises the electoral process, warned social and traditional media not to publish the alleged hacked emails lest they influence the vote outcome, but may find it difficult to enforce its rules in an era where people get much of their news online, information flows freely across borders and many users are anonymous.

“On the eve of the most important election for our institutions, the commission calls on everyone present on internet sites and social networks, primarily the media, but also all citizens, to show responsibility and not to pass on this content, so as not to distort the sincerity of the ballot,” the commission said in a statement on Saturday.

“The commission stresses that publication or republication of these data…could be a criminal offense,” it said.

French media covered the hack in various ways, with left-leading Liberation giving it prominence on its website but television news channels opting not to mention it.

Le Monde newspaper said on its website it would not publish the content of any of the leaked documents before the election, partly because the huge amount of data meant there was not enough time to report on it properly, but also because the dossiers had been published on purpose 48 hours before the election with the clear aim of affecting the vote.

“If these documents contain revelations, Le Monde will of course publish them after having investigated them, respecting our journalistic and ethical rules, and without allowing ourselves to be exploited by the publishing calendar of anonymous actors,” it said.

As much as 9 gigabytes of data purporting to be documents from the Macron campaign were posted on a profile called EMLEAKS to Pastebin, a site that allows anonymous document sharing.

It was not immediately clear who was responsible, but Macron’s political movement said in a statement the hack was an attempt to destabilize democracy and to damage the party.

En Marche! said the leaked documents dealt with the normal operations of a campaign and included some information on campaign accounts. It claimed the hackers had mixed false documents with authentic ones to “sow doubt and disinformation.”

Sunday’s election is seen as the most important in France for decades, with two diametrically opposed views of Europe and the country’s place in the world at stake.

Le Pen would close borders and quit the euro currency, while Macron wants closer European cooperation and an open economy.

Voters in some French overseas territories and the Americas were due to cast their ballots on Saturday, a day before voting in France itself. The first polling stations to open at 6 a.m. ET were in Saint Pierre and Miquelon, islands off Canada.

In France, police union Alternative Police warned in a statement that there was a risk of violence on election day by activists of the far-right or far-left.

More than 50,000 police and some 7,000 soldiers will provide security during voting on Sunday, with more than 12,000 security personnel covering the Paris region alone.

Macron’s campaign has previously complained about attempts to hack its emails, blaming Russian interests in part for the cyber attacks.

The Kremlin has denied it was behind any such attacks, although Macron’s camp renewed complaints against Russian media and a hackers’ group operating in Ukraine.