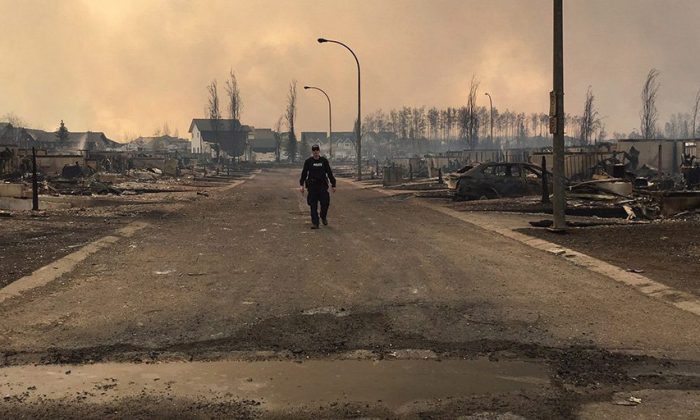 While it may take weeks for the people of Fort McMurray to return home, it may take months for them to be out of the woods psychologically.

Videos showed people fleeing through burning streets with smoke and amber rolling over their windshields and towering flames consuming their homes.

As if by a miracle, the blaze hasn’t taken a single life. Yet it hurt many and it will take time to see just how deeply.

As survival instincts subside and shock dissipates, the actual mental impact of the disaster sets in.

“We’re going to see some people have PTSD,” said Dr. Judi Malone, director of Education and Communications at the Psychologists Association of Alberta.

Even though Notley often praised Albertans for their resiliency, trauma is a malicious foe.

It may take weeks or even months to appear, Malone told Epoch Times in a phone interview.

And sometimes one may not recognize the traumatic experience messing with one’s psyche.

It may manifest as something seemingly unrelated—a headache, nausea, chest pain, Malone said.

More obvious symptoms could be a panic attack triggered by seeing fire or smelling ash.

Not everyone is affected the same way, or even at all, she said. People vary in their level of resiliency and the mental burden they may have been carrying prior to the disaster can also plays a role.

Post-traumatic stress disorder would be a rather severe outcome and even if one may be at risk, it can be prevented, Malone said.

One’s family and friends play the first line of defense. The more one feels and believes one is supported, the less likely one gets ensnared by trauma.

But that’s also where the disaster strikes. Right now, people are still in provisional housing, facing weeks before authorities let people back into the city.

And lacking the security of a home may strain relationships.

Yet, there are some simple things one can do. For starters, Malone suggests taking a break from news.

Submerging into an endless stream of updates and watching heart-wrenching footage on repeat hurts more than it helps. One needs to take time to digest the news.

Some quick exercise, for example, may reduce adrenaline levels, or not doing anything at all can also help some people.

“Be kind to yourself,” Malone recommended. One needs to recognize one’s feelings.

Finally, professionals are available to help.

Psychologists Association of Alberta (PAA) has more than three dozen trauma psychologists who are offering their services for free to the victims of the fires.

“If you have concerns, don’t hesitate,” Malone said.

One can call or email the association and receive contact information of three professionals to choose from, all available for an appointment.

One can even set up an appointment for somebody else, provided the person is willing to go.

Malone said their services are not intended for crisis response, but as a recovery program.

They can assess a person’s situation and provide a targeted remedy, varying from a breathing technique all the way to medication.