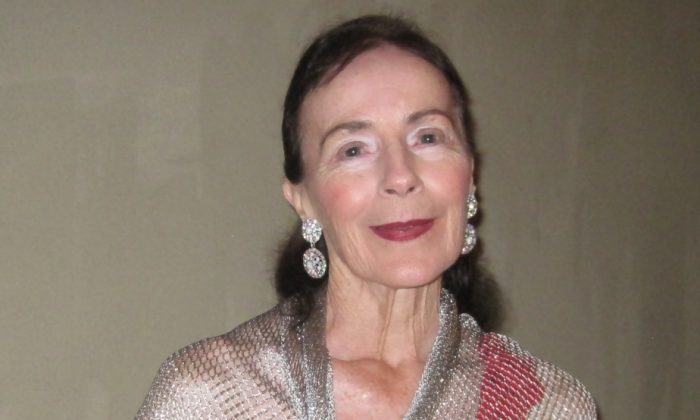 ESCONDIDO, Calif.—Rosemary Jones, a retired ice skater and artist, left the California Center for the Arts in Escondido on Wednesday evening with the feeling of oneness between Heaven and Earth.

She described her experience as, “A complete scope of exquisite artistry.”

Ms. Jones had just witnessed Shen Yun Performing Arts, a non-profit dedicated to reviving the true, divinely-inspired culture of China, which is known to have a history of 5000 years.

“It’s incredibly beautiful, the sharing of culture,” she said. “That love, compassion, and the arts can live … I’m deeply moved as I know everyone must be.”

On the surface, Shen Yun appears to be a music and dance performing arts company of the highest caliber, showcasing the world’s top classical Chinese dancers and featuring live orchestra, vibrant costumes, stunning backdrops, and musical soloists, according to the company website.

But the performers and audience members alike say it’s also much more.

“Throughout history almost every culture looked toward the divine for inspiration,” states the Shen Yun website. “Art was meant to uplift, bringing joy to both the people who created and experienced it. It is this principle that drives Shen Yun performers and their art.”

She was touched by the passion of the dancers for their art.

“They’re dancing from their heart, from their soul, with every ounce of their being,” she said.

Ms. Jones felt a deep spiritual message of love behind the entire performance, calling it a literal “marriage of Heaven and Earth.”

“We’re all deeply spiritual, and we’re all seeking the undefinable light that joins Heaven and Earth,” she said. “I know that from the show. I know it on the deepest level.”

She expressed gratitude to all of the people involved in the Shen Yun performance, and also to all people in the world, with whom she felt a close kinship.

Audience member Steve Hersom is a visual artist and also works as a plumber. He felt a profound “spiritual and moral teaching” in traditional Chinese culture portrayed by Shen Yun.

“I just love the composition of this Shen Yun,” said Mr. Hershom. “It’s a beautiful display of where we need to go spiritually. Today’s world is so full of violence, so it’s wonderful to see this good example to follow.”

With Shen Yun, audience members encounter “a sea of traditional Chinese culture,” states the company website. “Mortals and divine beings merge on stage as one. Principles such as benevolence and justice, propriety and wisdom, respect for the heavens, and divine retribution, all come to life, washing over the audience. Originating from Confucianism, Buddhism, and Taoism, these ideals are the essence of traditional Chinese culture.”

Mr. Hersom said the artistic side of the production was beautiful and complex. He was amazed at the combination of the interactive animated backdrop with the dance numbers, creating a three-dimensional piece of art that was so powerful, it was like an explosion, he said.

“It’s an explosion that comes out and affects all of us,” he said.

Overall, Mr. Hersom felt that Shen Yun encouraged people to live in harmony with each other and the entire world and not harm or destroy it.

“It’s very important to get this message out,” he said.