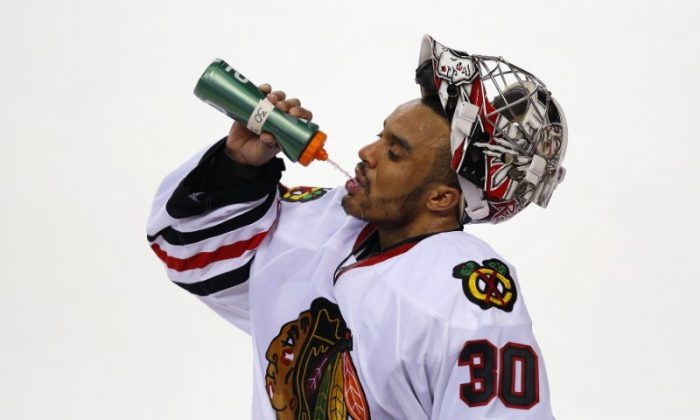 Ray Emery has a drink of water during a break in their game against the Calgary Flames during the third period of their NHL hockey game in Calgary, Alberta, Feb. 2, 2013. (REUTERS/Todd Korol)
US News

Former NHL goaltender Ray Emery died early Sunday morning in a swimming accident in the Hamilton, Ontario, harbor. He was 35.

According to Hamilton Police, Emery’s body was recovered near the Royal Hamilton Yacht Club at 2:50 p.m. in the same vicinity where he entered the water nearly nine hours earlier and didn’t surface.

The Hamilton Spectator reports Emery was visiting a friend’s boat and jumped in the water where it was docked at the club a little after 6 a.m.

“At this time we do not believe there to be suspicious or foul play,” Inspector Marty Schulenberg told the Spectator. “We do believe this is a case of misadventure.”

Police added that a cause of death will be announced after an autopsy.

A Hamilton native, Emery last played for the Philadelphia Flyers from 2013-15, his second stint with the team after starting a career-high 29 games for the Flyers in 2009-10, as they went on to reach the Stanley Cup Final. He spent the first five years of his career with the Ottawa Senators, who took him in the fourth round of the 2001 draft. He helped Ottawa to the finals in 2006-07.

Emery also played for the Anaheim Ducks and Chicago Blackhawks, winning a Stanley Cup title with the latter in 2012-13.

“On behalf of the Ottawa Senators, I wish to express my sincere condolences on the passing of Ray Emery,” Ottawa owner Eugene Melnyk said in a statement. “Ray was instrumental in our run to the 2007 Stanley Cup Final, and at his best he brought a competitive edge and combative mentality to the game. On behalf of our entire organization, I wish to extend my deepest sympathies to Ray’s family, friends and loved ones.”

The Flyers also expressed shock and sadness at Emery’s death.

“The Philadelphia Flyers are stunned and extremely saddened to hear of the tragic passing of former Flyers goaltender Ray Emery,” Flyers president Paul Holmgren said in a statement. “Ray was an outstanding teammate and an extremely gifted goaltender. He had exceptional athleticism, was a fierce competitor and battled in every game he played with the Flyers.

.”..Our thoughts and prayers go out to his family and friends during this difficult time.”

On their Twitter page, the Blackhawks posted a picture of Emery hoisting the Stanley Cup in 2013.

“The Chicago Blackhawks organization was deeply saddened to hear of Ray Emery’s passing,” the Blackhawks said in a statement. “We extend our heartfelt condolences to his family and friends. The Blackhawks will fondly remember Ray as a fierce competitor, a good teammate and a Stanley Cup champion.”