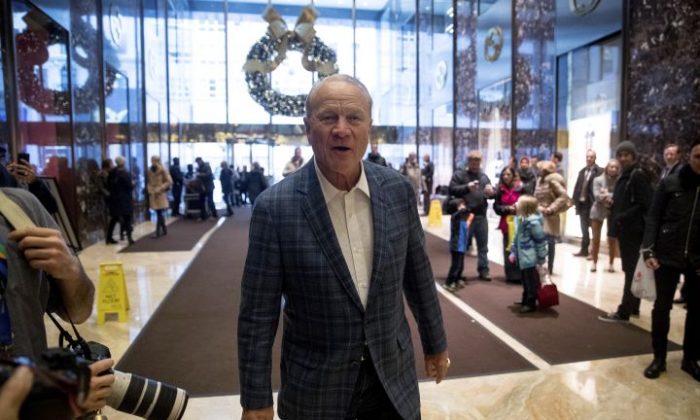 FILE - In this Dec. 7, 2016 file photo, former football player and coach Barry Switzer speaks to members of the media in the lobby of Trump Tower in New York. Switzer figured when he told reporters he was going to be the Secretary of Offense for Donald Trump he assumed they knew he was joking about meeting the president-elect. Switzer said Thursday, Dec. 22 that "I think they need to learn the cabinet positions." (AP Photo/Andrew Harnik, File)
US

Former Oklahoma and Dallas Cowboys coach Barry Switzer figured when he told reporters he was going to be the Secretary of Offense for Donald Trump he assumed they knew he was joking about meeting the president-elect.

“I think they need to learn the cabinet positions,” Switzer told The Associated Press by phone Thursday.

He was in New York City last week when he dropped by Trump Tower to see all the action around the building, which has been under heavy security since the November election.

Switzer stopped to speak with reporters and threw them off track by saying he had met with Trump, whom he has known for more than 20 years. And when he was leaving the building it looked as if he were getting off the elevators after visiting someone. Actually, he had gone to a Starbucks.

“I thought most of them knew when I told them he was making me Secretary of Offense,” Switzer said.

Switzer won three national championships during a 16-year career with the Sooners and won a Super Bowl as coach of the Dallas Cowboys in 1995. He said he met Trump in the early 1990s at an event in Las Vegas where they were promoting books they had written.

“I told him your book is going to do better than mine because you’re rich enough to go to all the bookstores and buy all the copies yourself,” Switzer said.

Switzer said he had a good laugh about the prank he pulled on reporters.

“Got to watch out for fake news these days,” he said.