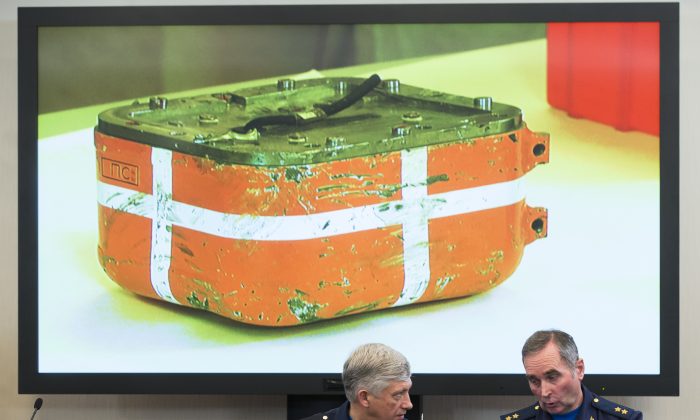 Russian aerospace forces Lt.-Gen. Sergei Dronov, left, and Lt.-Gen. Sergei Bainetov talk, as an image of a flight data recorder from the Russian warplane downed by Turkey is displayed on a screen in the background. during a news conference, in Moscow, Russia, Friday, Dec. 18, 2015. (AP Photo/Alexander Zemlianichenko)
International

MOSCOW—Russia on Friday invited foreign diplomats and experts to attend the examination of a flight recorder from a Russian warplane downed by Turkey last month.

Turkey shot down the Russian Su-24 bomber at the border with Syria on Nov. 24 saying it violated its airspace for 17 seconds despite repeated warnings. Russia insists the plane never entered Turkish airspace.

The incident, in which one pilot and a Russian marine of the rescue party were killed, badly strained previously close ties between the two economic partners.

Lt. Gen. Sergei Dronov, a deputy commander of the Russian aerospace forces, told reporters on Friday that Moscow has invited experts from 14 countries to take part in the study of the plane’s flight data recorder, which was recovered by Russian and Syrian forces from the area where the plane was shot down, but only British and Chinese experts have accepted the offer.

Pings Detected as Searchers Hone in on AirAsia Black Boxes

However, Lt.-Gen. Sergei Bainetov, a deputy head of the flight safety service of the Russian military, said after a preliminary inspection of the recorder that its data board had been damaged. It wasn’t immediately clear what data might have been lost.

Russian television on Friday aired an hour-long live broadcast from the lab as Russian experts unsealed the recorder and removed the data board in the presence of foreign experts.

Dronov said the data from the recorder will be released on Monday.