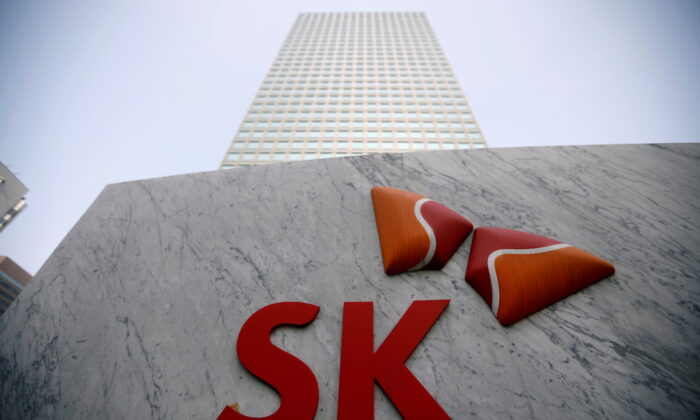 The logo of SK Innovation is seen in front of its headquarters in Seoul, South Korea, on Feb. 3, 2017. (Kim Hong-Ji/Reuters)
Companies

Tight supplies of batteries—key to electric vehicles—pose a challenge to the Biden administration, which aims to boost EV production and reduce the country’s reliance on imports for battery cells, components and materials.

“The current U.S. battery capacity is far short of meeting demand. Building a factory to meet demand requires a lead time of 30 months, and I see a battery shortage continuing at least until 2025,” Kim said, referring to the time needed to supply battery cells domestically, including factory site selection, construction and product testing.

In contrast, China is expected to have a battery oversupply, and Europe’s supply will be in line with demand, he said.

Ford and SK On plan to invest $4.45 billion each to build three new factories in the United States, with production slated to begin in 2025.

With the deal for the plants, which will be the biggest in the United States, SK said it has an industry-leading order backlog of 1,600-gigawatt hours, enough for 27 million vehicles.

SK Innovation spun off its battery business into its wholly-owned unit, SK On, as of Oct. 1.

He said there was only a slim chance that some automakers would succeed in efforts to build cells by themselves without partnering with cell makers who have experience of mass production.

“Cell manufacturing is not that simple. It has to go through a lot of trial and error,” Kim said.

“There is an interest in LFP technology from automakers,” SK On’s Jee said.

Ford and Volkswagen are diversifying into LFP technology, which is the mainstay of Chinese battery makers, following Tesla’s lead.

The lower-range, cheaper LFP battery is also gaining attention for its thermal stability, after a series of vehicle fires involving nickel-based batteries produced by LG and used in GM’s Bolt cars.

SK, which does not have a record of fire accidents, plans to produce high-nickel, pouch-type batteries at its joint venture with Ford.

SK On is considering other joint ventures and financing options, but will not hurry to go public, Kim said.