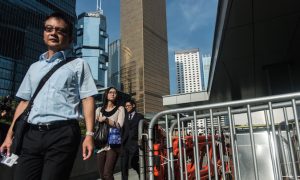 It’s not quite yet Halloween, but pro-democracy Hongkongers have already gotten into the spirit of things with a “ghoulish” get up.

Occupy Central supporters have shared photos or Photoshopped images of themselves or others with a yellow strip of paper with the words “I Want Real Universal Suffrage” stuck to their forehead.

If you’ve watched enough horror films, or older (1970s-1990s) Hong Kong kung fu flick, you’ll recognize that the Occupy Central protesters and supporters are re-purposing the yellow strips as the talisman plastered to the foreheads of jiangshi, a type of Chinese undead ghoul that has traits of both Western zombies (stiff movement, “mindless” behavior) and vampires (feeding off a living person’s live essence).

So why have the protesters suddenly decided to portray such terrifying creatures?

The “Chinese ghoul” get up is really an offshoot of the “Lion Rock Banner” meme.

After the banner went up, netizens have been busy Photoshopping the banner on to a host of other famous lions and other things.

The rock climbers, who call themselves “The Hong Kong Spidie” after the comic book hero Spiderman, declare that they are “occupying Lion Rock” to support the people of Hong Kong who are “fighting for real universal suffrage.”

“This kind of fighting against injustice, strength in the face of troubles, is the true Lion Rock spirit,” said a man in Spiderman garb (via South China Morning Post).

The “Lion Rock spirit” is a term that was popularized after a 1970s Hong Kong television series, “Below the Lion Rock,” which depicts the lives of working-class people in Hong Kong who settled in areas around the Lion Rock.

Because of the show, the “Lion Rock spirit” has come to mean the striving for a better life with a can-do attitude, as well as “perseverance, mutual help and care,”  according to a government press release of the time (via Wall Street Journal).

These days, however, the Hong Kong government under Chief Executive Leung Chun-ying has adopted a “no-can-do” attitude towards democratic reform and advocates of it, preferring to take the side of the Chinese Communist regime in Beijing, much to the dismay and anger of Hongkongers.

MORE: What is Occupy Central and Why it Matters

Unsurprisingly, the “Lion Rock Banner” was eventually taken down by the Fire Services Department, the Civil Aid Service, the Government Flying Service, and the Hong Kong police because “the huge banner hanging on the cliff would have posed danger to public safety it it had been blown off by strong wind,” a government spokesman said.

Still, the supporters of democracy in Hong Kong have been pretty resilient in the face of government adversity thus far, and are proving so again with the removal of the “Lion Rock Banner.”

Occupy Central protesters have started displaying smaller versions of the “Lion Rock Banner” at their protest sites, and Hong Kong publication Apple Daily is even handing out a good-sized poster with their Friday edition.

Indeed, despite the Hong Kong government’s best efforts to quash expressions of democratic sentiment, just like the latest “Chinese ghoul” meme, the spirit of democracy simply returns to “haunt” them.