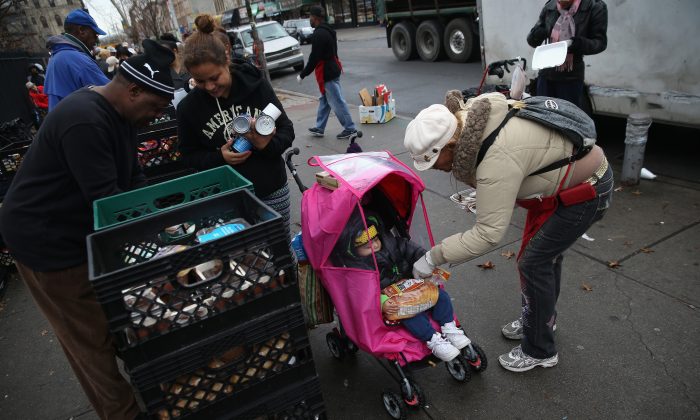 Residents receive free food as part of a Bowery Mission outreach program in Brooklyn, New York, on Dec, 5, 2013. The Christan ministry said it has seen a spike in need since food stamps to low-income families were reduced in November with cuts to the federal Supplemental Nutrition Assistance Program. (John Moore/Getty Images)
New York

NEW YORK—People are asking for extra. Stock is being rationed so there is enough for everyone in line. Those in need are turned away. These are some of the new realities of food pantries around New York City, three months after a $5 billion national cut to the federal assistance program. For those who use the Supplemental Nutrition Assistance Program (SNAP), known as food stamps, it could get worse. Congress is currently considering cutting billions more as it considers the farm bill.

The SNAP cuts in November had an almost immediate impact. Most of the 1.9 million New Yorkers who were left without food stamps on Nov. 1, 2013, turned to food pantries and soup kitchens.

Those food pantries and soup kitchens overall throughout the city saw an 85 percent increase in visitors that month compared to November 2012, just after Superstorm Sandy, according to a survey of Food Bank for New York City, a nonprofit organization that organizes food and provides support to the city’s poorest population. The results of its report were released on Jan. 22 during its annual NYC Conference on Hunger and Poverty.

Those numbers, coupled with the prospect of even more cuts, has advocates deeply concerned as they plan for more advocacy as a way to stop hunger among the poor.

“Food is the first point of need,” said Vera Walters, a food distribution center coordinator at East New York’s Church of God of Prophecy in Brooklyn, at the Jan. 22 conference.

Cuts to the SNAP program are part of a larger trend in less federal spending on programs that serve the needy. The impact has stung many residents in New York City, where the U.S. Census Bureau said that 14.8 percent of the population is poor.

“These mandatory cuts severely hinder our work to provide safe, affordable housing, as well as access to critical services, to the most vulnerable population—low-income New Yorkers,” said NYCHA Chairman John B. Rhea in a statement at the time.

Food is just the beginning of troubles for the city’s needy. People also need help with rent, employment, and education for children who have dropped out of school, and other needs.

To get more food, churches that run food banks sometimes turn to community boards, seek extra collections in church, seek donations from local charities, and funds from the city.

At Brooklyn’s Church of God of Prophecy, its food distribution lines went from 250 before November to about 350, and on Thanksgiving Day they reached around 600 people. They also have a food pantry and a soup kitchen on Saturdays.

Co-founder of Community Food Advocates, Agnes Molnar, said she was happy to hear that there will be more focus on advocacy by the food bank.

“The problem is people still don’t take advantage of the programs they could be taking advantage of,” she said. “A lot of times people feel ashamed to say that they need the help.” The problem is even more pervasive in schools.

Molnar said that school food programs have been stigmatized as the “welfare program for poor kids. Kids don’t want to be identified, even if they’re paying for lunch, as poor. For her a possible solution would be to make all school meals free for all children in public schools.

If the reports from food banks and soup kitchens to Food Bank for New York City are any indication, a serious problem could be brewing. The organization said on Wednesday that more than two-thirds have reported major increases in people looking for help.

More alarming is that half of the city’s hunger-relief community had to turn people away in the past few months, and 25 percent had to ration the food to make sure there was at least some food for everyone.

Margaret Purvis, president and CEO at Food Bank for New York City, introduced the organization’s new strategy plan during its annual event to a hall full of representatives of food distribution centers.

“There is a war against the poor all over our country,” she said. “The resources aren’t growing, therefore our response has got to change.”