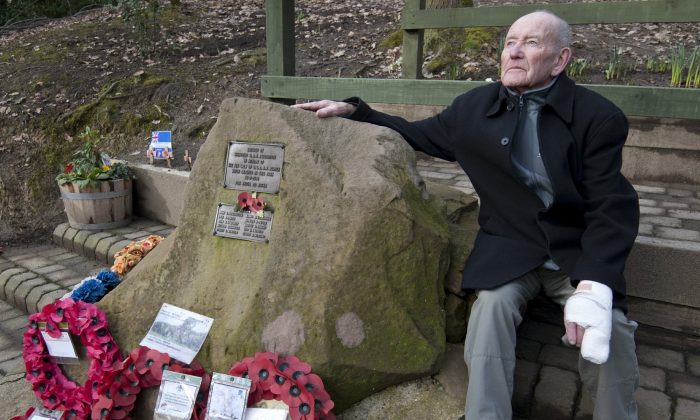 Tony Foulds sits next to a memorial honouring 10 U.S. airmen who died in a 1944 plane crash in Endcliffe Park, Sheffield, England, on Feb. 13, 2019. (Rui Vieira/AP Photo)
US Features

SHEFFIELD, England—Tony Foulds has a routine when he visits the memorial for 10 American airmen killed in World War II.

First, he kisses his finger and lays it on the metal plate bearing their names. Then he sits beside the rock, laying a shaky hand on its smooth slope with the care of someone offering comfort to a loved one. As he taps the stone, Foulds tells the airmen about the weather and his plans for the day.

It’s the least he can do because Foulds believes the young Americans sacrificed their lives to save his. The pilot decided not to land his crippled plane on Endcliffe Park, in the English city of Sheffield, to avoid a group of children on the grass.

“I pray for them every morning,” the 82-year-old retired engineer said. “I would’ve been dead if they didn’t do what they did.”

Tony has long dreamed of more public recognition of the sacrifice made by the crew of the B-17G Flying Fortress nicknamed “Mi Amigo.” He wanted an aerial display—a flypast—befitting men who fought in the sky.

On Feb. 22, he will get his wish. The United States and the Royal Air Force are set to honor Lt. John G. Kriegshauser and his crew.

But even that won’t ease Foulds’ guilt.

The mission was a daring daylight raid on the Aalborg airfield in occupied Denmark, a key fighter base that protected Germany from Allied bombers. Mi Amigo was hit in the attack and limped back across the North Sea, trying to get to its base in Chelveston, England.

But the weather was poor. When the plane broke through the clouds looking for somewhere to land, it was over Sheffield, 80 miles (130 kilometers) northwest.

Tony was almost 8 years old, and that day he had gathered with other children for a schoolyard brawl in Endcliffe Park, an oasis of green surrounded by terraced houses. After five years of war, including German attacks on Sheffield’s steel and armaments plants, the boys were accustomed to hearing planes. But the sound of this aircraft wasn’t right.

“When it came over, one engine working, spitting oil, you could actually see daylight through the tail. That’s how bad it was,” Foulds said. “I only saw one person. No gunner. No co-pilot. No radio operator. I just saw the pilot.”

The pilot circled when he saw the stretch of green and waved his arms at the kids. They waved back. Years later, Tony realized he was trying to get them to run out of the way.

The plane circled three times, the last time coming in so low it was just above the houses’ chimneys. The pilot could have tried to land on the green, but he didn’t. He turned his plane into the nearby woods, tried to rev up his only working engine and failed to gain altitude.

“They could have saved themselves,” Foulds said. “I’ve put myself in their place many a time and thought if I was wanting to land and there were children on, I would think to myself, ‘Well, I’ll land and hope I don’t hit them.’”

But Mi Amigo’s pilot made another choice. The plane crashed. There were no survivors.

Foulds has been wracked by guilt ever since, wondering why he was blessed to go on with his life, to have children and grandchildren, when the men on that plane were not.

“I can’t see anyone else ever doing what these lads did—giving their own lives for a foreigner,” he said. “I killed these lads.”

As a young boy, Foulds didn’t dwell on that day. But when he was 17, he came across the crater where Mi Amigo crashed and decided to make sure its crew was never forgotten. A memorial was built in 1969, and as the years went by he visited it as many as 260 times a year.

But he dreamed of a proper military honor—a flypast.

His ideas were modest but got no traction. The RAF’s Red Arrows aerial display team ignored his letter. The police said no to a helicopter. He even thought about a hang-glider with an American flag but was told that would not work.

But Foulds kept promising his friends he wouldn’t give up.

“I said to them, ‘You are now going to be the best memorial in this country,’” he said turning to the stone.

In January, BBC presenter Dan Walker described Foulds’ dream and started a Twitter campaign under the hashtag #gettonyaflypast. The Americans noticed and so did the community. Soon after, the commander of the 48th Fighter Wing at Royal Air Force Lakenheath, Col. William L. Marshall, told Foulds on a live morning TV program that his dream would come true.

Now the whole city is getting ready. Alison MacIntyre, a park neighbor, promises the area will be “heaving” with people on Friday.

“This is a story of heroism,” said Paul Allonby, a retired civil servant who wrote a book about Mi Amigo called “Courage Above the Clouds.”

“It means so much to local people … heroism lives on, people are not forgotten.”

Some 30,000 American airmen died while flying from England during World War II. Southeast England, where most of the bases were located, is dotted with memorials to those who helped defend Britain. The Cambridge American Cemetery contains the remains of 3,811 United States casualties, including Mi Amigo crewmembers Robbins, Tuttle, and Estabrooks.

The flypast will take note of those three, traveling over the cemetery after it flies over Sheffield. The United States Air Force Maj. Sybil Taunton said it’s a shame there can’t be more flypasts over other memorials.

“If it were possible for us to fly over them all to express our gratitude for their sacrifices, and for those keeping their memories alive, we absolutely would,” Taunton said.

In the American Midwest, the Kriegshauser family started getting calls from reporters. The three sons of the pilot’s older brother, Arthur, are grateful, if somewhat surprised, by the reaction. Some family members are coming for the big day.

And they want to meet Foulds.

“I want to thank him deeply because he has been like a real leading light in keeping the memory of this alive and in fact assisting our family into knowing more about what actually happened,” said the lieutenant’s nephew and namesake, John Kriegshauser.

The family remembers Lt. Kriegshauser as athletic, extroverted and popular, a young man besotted by the romance of aviation after Charles Lindbergh’s historic 1927 solo flight across the Atlantic. After enlisting in the U.S. Army Air Corps and serving as a radio operator, he was selected for pilot training after the 1941 attack on Pearl Harbor.

Once overseas, Kriegshauser knew he might not make it back, writing his family that “this is a letter which I hope is never mailed.”

“My final word,” the pilot wrote, “is that I’m glad to have been able to lay down my life for a cause I believed was just and right.”

Foulds can’t wait to meet Kriegshauser’s relatives. Just the thought makes him cry. But as he taps his hand on the stone memorial, he’s focused on the crew, saying over and over that the flypast will make the men feel special. To him, they are family.

“I’m having my ashes put behind the memorial,” he said. “So I’m going to be with them forever. … This is love between me and the lads, and it always will be. It will never alter.”

Besides, the flypast will give them something to talk about for years to come.