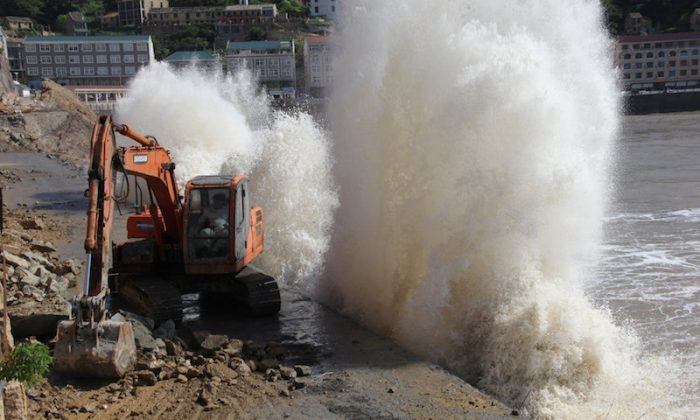 A wave breaks on the waterfront next to an excavator, as super typhoon Maria approaches, in Taizhou, Zhejiang province, China, July 10, 2018. (REUTERS/Stringer)
Asia & Pacific

Flights Canceled as Taiwan Battens Down for Powerful Typhoon

TAIPEI—Taiwan braced for Typhoon Maria on Tuesday, prompting school closures and the cancellations of hundreds of flights amid warnings of landslides and floods on the island.

Maria was expected to approach the northern coast early on Wednesday as it moves in a west-northwesterly direction at 30 kph (19 mph), weather officials said.

At one point a super typhoon, Taiwan’s Central Weather Bureau has downgraded Maria to a medium-strength storm with wind gusts of up to 209 km per hour (129 mph).

Local governments in most part of northern Taiwan plan to close offices and schools on Wednesday, but financial markets will remain open, authorities announced late on Tuesday.

Troops were deployed in some areas amid fears of landslides and fishermen in the northern city of Keelung tried to protect boats from the storm.

China Airlines and Eva Airways, Taiwan’s two largest carriers, canceled many flights and warned more could be delayed because of the typhoon.

Taiwan is frequently hit by typhoons during the summer, and stepped up preparations to guard against them after Typhoon Morakot devastated the island in 2009. It killed nearly 700 people, most of them in landslides.