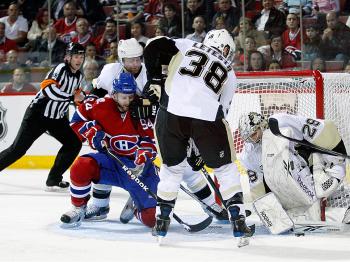 By Rahul Vaidyanath
Print
The Pittsburgh Penguins kept their cool in front of a raucous Montreal crowd on Tuesday night. The defending Stanley Cup champions came away with a hard-fought 2–0 win as goalie Marc-Andre Fleury was the game’s first star.

Fleury, a Quebec native, entered the game with an unimpressive .889 save percentage and 2.80 goals against average. But he silenced his critics in front of family and friends, stopping all 18 shots he faced.

“It feels good. It’s not easy to win,” said Fleury in an interview with RDS.

“We played well in all aspects. Every time in Montreal, it’s more exciting in front of family and friends.”

“He came up big at a time where he didn’t get a lot of work in the game,” said Penguins coach Dan Bylsma.

Truth be told, Montreal’s attack was anemic and after the first period, the home team only managed 11 shots on net.

The defending Stanley Cup champions, with four Quebec natives in their lineup, knew they had to hold their emotions in check in the first period.

Montreal dominated the first period with several great scoring opportunities. But Fleury was calm and collected while his teammates tried to fend off attack after attack.

The first period was a reversal of Game 2, which was dominated by Pittsburgh. But after Pittsburgh got through that rough patch, they started to assert themselves.

The teams started to show their dislike of each other with lots of pushing and shoving at the end of the second period. And that’s what seemed to awaken Evgeni Malkin, who had an inspired game leading his team with seven shots on net.

Last year’s Conn Smythe Trophy winner, has been quiet thus far but with Sidney Crosby in a mini-slump, the lanky Russian took charge and scored the game-winner early in the third period.

Laval, Quebec native Pascal Dupuis scored in an empty net to seal the win for the Penguins who take a 2–1 series lead.

The Penguins proved they can win close games. The Washington Capitals were not able to win the low-scoring playoff games and, as a result, Montreal beat them. But now, the Penguins are back in the driver’s seat although the series is far from over. Game 4 goes Thursday night.