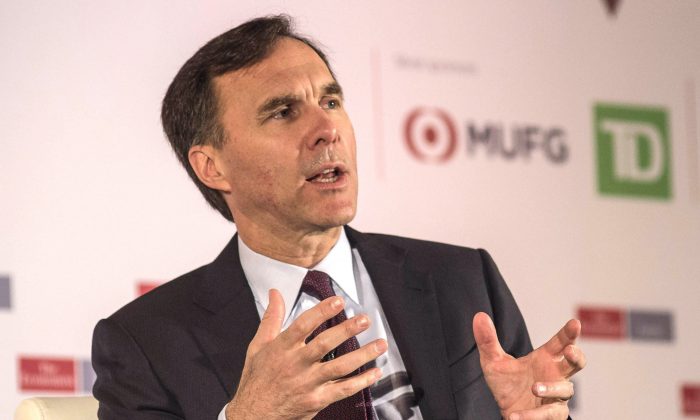 TORONTO—Just throwing money at the problem won’t solve Canada’s innovation enigma. A cultural shift needs to take place where innovators are celebrated and not scorned for failure. Appropriate government policy also has a critical enabling role to play.

These are some of the takeaways from The Economist’s Canada Summit on June 8 where entrepreneurs, business leaders, and policy makers united to share ideas on kick-starting innovation.

It is a much-needed discussion as Canada ranks 22nd in the World Economic Forum’s innovation ranking despite having the lowest business operating costs in the G7, the world’s soundest banking system, a high standard of living, and educated workforce.

The end goal is scaling up companies—taking a company’s revenue from say $10 million to $100 million a year. In Canada, just 0.2 percent of companies have more than 500 employees.

“We’re not the first government to identify it [innovation] as a challenge,” says Finance Minister Bill Morneau, one of two featured keynote speakers at the Canada Summit along with Prime Minister Justin Trudeau.

The Trudeau government announced a new Innovation Agenda in its 2016 budget that was short on details, but work is underway along with the Ministry of Innovation, Science and Economic Development to put meat on the bones.

Andrei Sulzenko, a former senior assistant deputy minister of policy at Industry Canada, also sees Canada lagging in innovation. His take is that Canada has been dealing with the symptoms—weak research and development performance, for which generous tax credits are given—rather than dealing with the root of the problem.

“The lack of serious, sustained competitive pressures in key sectors of the Canadian economy has made it rational for businesses to underinvest in a range of riskier innovation activities,” said Sulzenko in a press release. He says market competition should be promoted and it starts with reviewing the impact of trade, investment, and regulation on incentives to foster innovation.

Sulzenko is the author of a report for the Institute for Research on Public Policy that gives clear suggestions for the Innovation Agenda.

Along with the right policy actions, a culture change is needed.

The speakers at the Canada Summit agree that Canadians’ politeness or modesty seems to be a hindrance.

“We don’t like to tout our own success,” says Andrea Stairs, eBay Canada’s managing director. She says we do a “terrible job” of making our success stories widely accessible. While young, successful entrepreneurs may never have the fame of an equally successful pro athlete, the gap is much bigger than it should be.

Jacques Bernier, venture capitalist, entrepreneur, and managing partner at Teralys Capital says the media has a huge responsibility here. “The media has to make entrepreneurs stars more frequently,” he says.

“We’re not known to be bold and aggressive,” says Allen Lau, CEO of Wattpad, about the stereotype of “Brand Canada”. “But we’re also nice people, and those two can co-exist.”

The serial entrepreneur will have multiple failures for every success. Society must not frown upon an innovator whose idea didn’t work out for whatever reason. The attempt at innovation must be embraced and encouraged. Canada needs more serial entrepreneurs.

“We have been pretty hostile to failure,” says former Bank of Canada governor David Dodge. The broad response to failure is a curbing of risk-taking. Dodge advocates risk-taking, which applies at all levels of the ecosystem, and says failures should be looked at as steps on the path to success.

Dodge says there is a difference in climate between Canada and the U.S. in terms of how failure is viewed. Canada can’t keep penalizing failures economically or socially as it has tended to do historically, says Dodge.

Given the world’s growth rate keeps getting shaved, economists feel developed world pre-financial crisis growth rates won’t be seen again. “We’re in a new world which has a lower potential growth rate for the world than what we had 15 years ago,” says Dodge.

Therefore, this is a critical period for innovation in Canada. Sulzenko says innovation-driven productivity improvements are the best sustainable source of future growth for Canada.