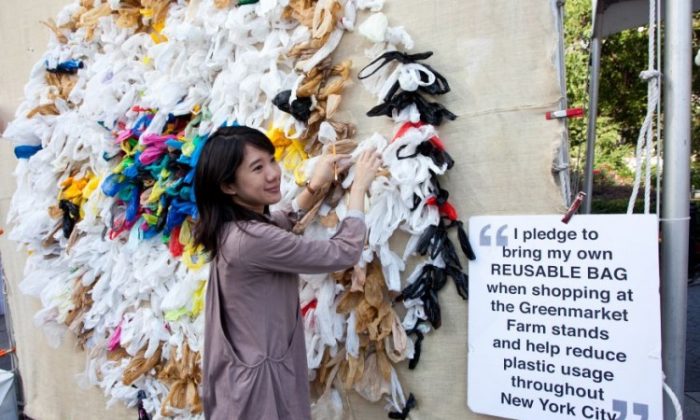 The Bag Mandalla stood proudly in Union Square showing a beautiful reuse of the waste. Bags for the People project are made produced in collaboration with a design team from Pratt Institute. (Amal Chen/The Epoch Times)
US

Five Easy Ways to Benefit the Environment in NYC

The event offered five simple ways to help the environment:

1. Limit the use of plastic bags. Next time you go to the supermarket, take some reusable bags with you. Plastic bags are made from oil. The bags then become waste after a single use. Conventional plastic bags do not biodegrade and often end up in the natural environment, causing harm to many species, according to the Bags For The People website.

2. Shift to green energy. Green Mountain Energy has helped initiate the development of more than 50 solar- and wind-powered facilities across the United States, with some facilities in upstate New York. You can opt for 100 percent pollution-free electricity, at comparable pricing. The Empire State Building made the switch in 2011, helping the iconic building avoid causing the release of nearly 100 million pounds of carbon dioxide each year.

3. Recycling has been made easier in recent years by the Department of Sanitation. Make a simple habit of splitting your waste into three categories: paper and cardboard; beverage cartons, bottles, cans, metals, and foil; and everything else is trash.

4. Deconstruction rather than demolition. If you are planning a refurbishment or a rebuild, certain companies will deconstruct your home and remove your salvageable building parts and furniture for free. They then make the collected material available for sale. It’s kind of like “goodwill meets Home Depot,” said Jaclyn Jablkowski, from Build it Green. Last year Build it Green diverted 900 tons of material from landfills back into the building industry.

5. Buy produce from urban farms. This limits pollution caused by transportation by trucks and trains. At the same time, it is a great way to educate children about food growth cycles and allow them to become more aware of their relationship with nature. People are less likely to unknowingly pollute if they are aware of how it may affect others, and their food sources.

New Green City 2012, hosted by GrowNYC, brought together knowledge and education about environmental issues from around the five boroughs. In most cases, simple changes in our routines can help reduce large environmental problems.