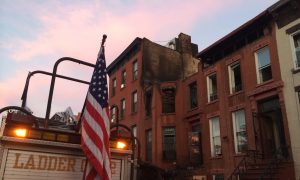 CONEWAGO, Pa.—Firefighters are battling a blaze at a chemical plant in Pennsylvania but say smoke from the fire is not considered toxic.

The fire started at around 3:30 a.m. Monday at Miller Chemical and Fertilizer in Conewago, Adams County. It continued to smolder hours later. Firefighters say they’re letting the fire burn out.

People at the scene reported a nasty smell and burning eyes. Officials are monitoring air quality.

Four Firefighters Died While on Duty Honored at Memorial

A fire chief says homes would have been evacuated if winds had shifted and pushed smoke their way.

Officials initially described the fire as a “major hazmat incident.” Several containers could be heard exploding.