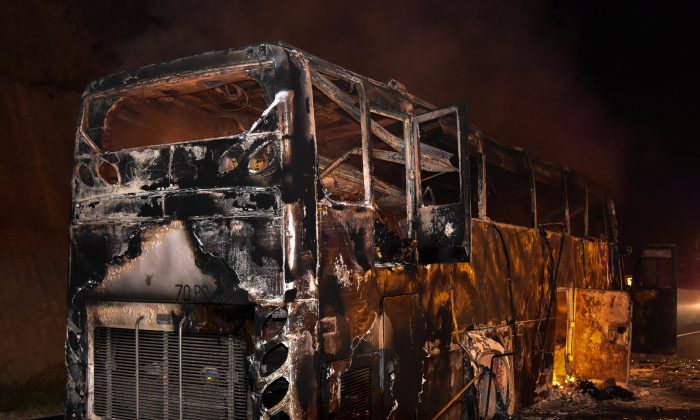 Firefighters extinguish a fire on board a bus, which killed migrant workers from Myanmar, in Tak province, Thailand, March 30, 2018. (Dailynews via Reuters)
Asia & Pacific

BANGKOK—A fire on board a bus in western Thailand killed 20 migrant workers from Myanmar early on Friday, police said.

The bus was carrying 47 workers who had just crossed the border into Thailand to work legally. Three other people on the bus were injured but the rest escaped unharmed, police said.

“The driver said he saw fire breaking out from the middle of the bus, which then spread quickly,” Kritkanok Dan-udom, the chief of Maetor district police station, told Reuters.

Pictures in Thai media showed the burnt-out shell of the bus.

Thailand’s roads have been ranked as the deadliest in the world after Libya’s, according to the World Health Organization’s most recent study.

Thailand is estimated to have more than 3 million migrant workers, many of whom come from much poorer neighbor Myanmar. Work permit rules were tightened last year.