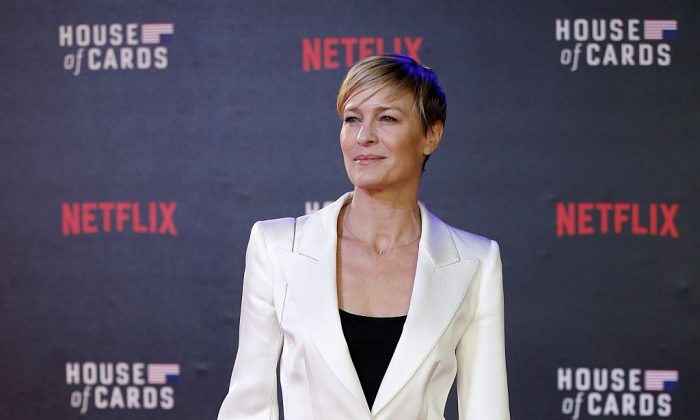 US actress Robin Wright poses for photographers on the red carpet ahead of the world premiere of the television series 'House of Cards - Season 3 Episode 1' in London on February 26, 2015. (JUSTIN TALLIS/AFP/Getty Images)
Entertainment News

The final season of Netflix’s political drama “House of Cards” will focus on Robin Wright’s first female president character and will start production in 2018, following a hiatus after the exit of star Kevin Spacey, the company said on Monday.

Netflix’s Chief Content Officer Ted Sarandos told the UBS 45th Annual Global Media and Communications Conference in New York that the sixth season would be shortened to eight episodes instead of the usual 13.

Netflix Inc severed ties in November with Spacey, one of its biggest stars who played fictional U.S. president Frank Underwood in “House of Cards,” after accusations of sexual misconduct against the Oscar-winning actor.

Reuters was unable to independently confirmed the accusations.

“We have made an arrangement to produce six seasons of ‘House of Cards’. It will be an eight-episode season. It will start production in early 2018 and it will not involve Kevin Spacey,” Sarandos said.

Sarandos did not say when season six would air or how Spacey’s character would be treated in the show.

A representative for Spacey did not respond to a request for comment.

Claire Underwood has moved center stage since “House of Cards” premiered in 2013, going from the wife of Spacey’s congressman to first lady and then vice president.

Wright has won a Golden Globe for her role, and earned five Emmy nominations.