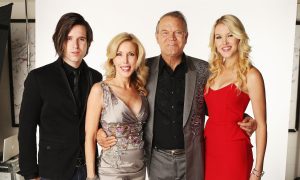 As a one-time member of the first-call studio ensemble the Wrecking Crew, Glen Campbell could definitely play. His livelihood depended on it. That musical prowess will not abandon Campbell, even when he faces the early and intermediate stages of Alzheimer’s.

His “goodbye tour” will be a tense high wire for his family and sidemen, but there will be moments that justify the stress. James Keach documents the good times and mounting frustrations onstage and behind the scenes in “Glen Campbell: I’ll Be Me.”

For the benefit of those who only know “Rhinestone Cowboy” in a rather condescending way, Keach does a nice job encapsulating Campbell’s career in the film’s opening minutes. He and his fourth wife Kim (a former Rockette) will soon get the unambiguous confirmation of his Alzheimer’s diagnosis. Even at this early stage, it is clear she understands the implications far better than he.

In fact, Kim Campbell is really the protagonist of “I’ll Be Me” more than her husband, because she is the one who will take the responsibility and do the work, with the help of their grown children Ashley, Cal, and Shannon, who are also regular members of Campbell’s band.

Despite the risks, the Campbells decide to embark on one last tour, as a way to give longtime fans a sense of closure. In the early going, performing also seems to have a therapeutic benefit for Campbell. The shows are generally quite good, but there are always awkward moments that will become more frequent over time.

In many ways, “I’ll Be Me” is the equal inverse film of Alan Hicks’s “Keep on Keepin’ On,” documenting Clark Terry’s continuing dedication to his student while his physical health precipitously declines. Terry’s body might be failing him, but he remains a supportive and insightful music teacher and mentor. On the other hand, Campbell is still strong as a bull, but his brain chemistry is betraying him.

By its very nature, “I’ll Be Me” asks just what performers owe to their fans and vice versa. Like most real musicians, Campbell during happier days would probably have said he owed them everything and they owed him nothing.

Yet, the way the fans pick him up and cover for his rough patches during the later dates is rather touching. So too are bonds shared by Campbell, his wife, and their children. In fact, “I’ll Be Me” could very well launch Ashley Campbell as a chart-topper in her own right. Yes, she is photogenic, but she can also play like a chip off the block.

In any documentary closely chronicling sickness and tribulation, there is always the risk of confusing exploitation with intimacy. Keach always stays on the right side of the line, showing enough for reality to hit home but never intruding into the truly ugly moments. Sensitive to all concerned but still honest to the circumstances, he largely redeems himself for helming the misguidedly cloying “Waiting for Forever.”

Recommended for fans of Campbell and fans of his fans (such as Jimmy Webb, Sheryl Crow, and Taylor Swift), “Glen Campbell: I’ll Be Me” opens this Friday, Oct. 24, in New York at the AMC Empire.