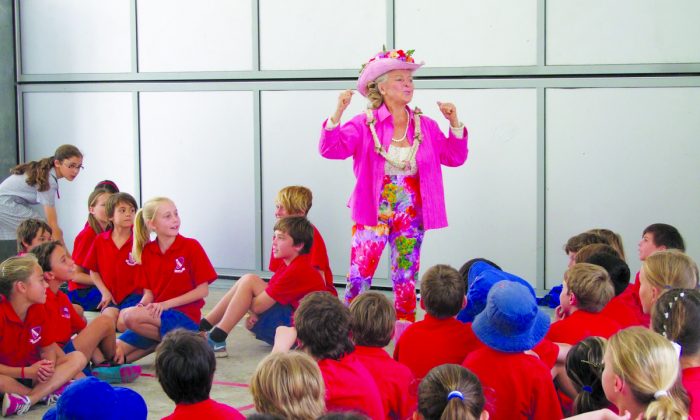 Although she’s over 80, Patricia Bragg, CEO of Bragg Live Food Products, says she feels ageless because she has always lived a healthy lifestyle.

Standing 5 feet tall and weighing 95 pounds, Bragg, who’s also a naturopathic doctor, has made it her life’s work to educate the world on the virtues of eating, drinking, breathing, and thinking healthy.

She lives what she calls “the Bragg Healthy Lifestyle,” which focuses on a clean, whole-foods diet that helps purify the body, allowing its natural healing systems to function. She shared some tips from this system.

That’s because apples detoxify the bloodstream and various organs in the body, she said, and might be why the old adage was coined: “An apple a day keeps the doctor away.”

Raw, unfiltered apple cider vinegar from the juice of organic apples contains the “mother” of the vinegar, cobweb-like strands of living enzymes, as well as minerals such as potassium, phosphorus, fluorine, silicon, and other nutrients, according to the Bragg website.

Apple cider vinegar acts as a purifier because it can break down fatty mucous and phlegm.

Apple cider vinegar acts as a purifier because it can break down fatty mucous and phlegm. Among numerous benefits, it helps relieve constipation, headaches, arthritis, indigestion, and chronic fatigue.

She said fasting once a week and doing four fasts per year for seven to ten days at a time, helps keep our organs working at maximum efficiency.

This is because it takes energy for our bodies to pass a large meal through the gastrointestinal tract and then eliminate the waste. If the meal is not fully eliminated, it becomes toxic waste, which can cause illnesses and weight gain.

Fasting gives the body a chance to fully eliminate, unclog, and cleanse our systems.

Eat Organic Fruits and Vegetables. Bragg believes that diet with lots of organic fruits and vegetables naturally detoxifies and purifies the body, which promotes longevity and prevents aches, pains, and premature aging.

Fresh fruits are aggressive at fighting toxins. They help to flush and dissolve toxic poisons from the body, Bragg said. She recommends eating a fruit salad at the beginning of every meal, then waiting 10 minutes before eating hot food.

The fruit prepares the stomach for the hot food, she said.

Cut Down on Stress. Bragg recommends exercise, walking, meditating, taking a break, or listening to music as good ways to alleviate stress. Therapies such as acupuncture, acupressure, massage, and reflexology can also help, she said.

Simplify and Enjoy Your Meals. The simpler the meal, the better because we’re less likely to overeat and end up with digestive distress. Bragg makes the point that most animals eat only one item of food at each meal, so they rarely suffer from digestive stress. But humans overindulge by eating too many mixtures and often overeat.

She believes that the fewer items of food there are on your plate, the less likely you will overeat and the healthier you will be.

Exercise. Do some type of physical activity every day. Bragg suggests walking, stretching, or riding a stationary bicycle. For every half hour you sit, she recommends getting up and jogging in place for a couple minutes.

Keep moving and don’t sit too much, she said.