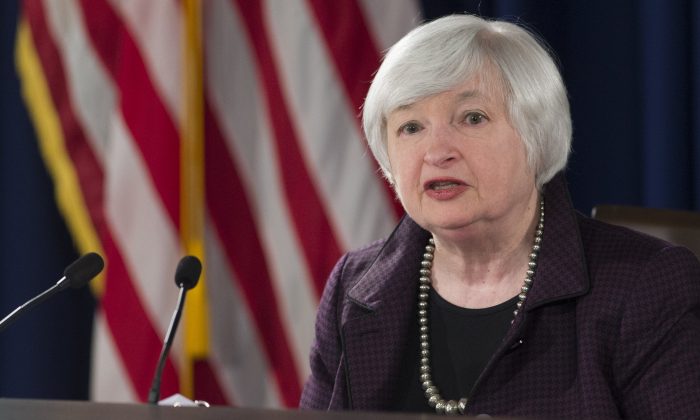 The Federal Reserve won’t start raising rates for at least the next couple of meetings depending on how incoming economic data bears on the good progress the American economy is making.

Fed chair Janet Yellen attempted to clarify a wording change in the Federal Open Market Committee (FOMC) statement released at 2 p.m. on Wednesday. Dec. 17. Much debate has been made over the “considerable” term used to describe the period of time between the end of asset purchases and the start of interest rate hikes.

“The Committee judges that it can be patient in beginning to normalize the stance of monetary policy,” reads the FOMC statement.

Yellen pointed out that there is no change in policy, but rather the new wording “patient” attempts to better reflect the FOMC’s focus on “conditions that would make lift-off [rate hikes] appropriate.” As asset purchases ended in October, Yellen did not want to keep referring back to October as a starting point in time.

Market participants had generally been eyeing a mid-2015 timeframe for the start of rate hikes given the end of asset purchases in October. So now, it is not inconceivable for that first rate hike to take place on May 1, the date of the third FOMC statement release of 2015.

But in addressing inflation being stubbornly below target, the FOMC believes that the effects of tumbling oil prices are “transitory” and expects inflation to gradually rise to the 2 percent target.

Yellen called the current decline in oil prices a “net positive” for the U.S. economy in that, for consumers, it acts “like a tax cut that boosts their spending power.”

But Yellen expects that, due to the drop in oil prices and falling import prices, headline inflation should be under downward pressure for a while.

The Fed will also continue its reinvestment of principal payments from its existing holdings in treasuries and agency mortgage debt.

Notably, there were three dissents to the statement. In this transition period for the Fed, Yellen said it was “very reasonable to see divergences of opinion.” She acknowledged that there was a “wide range of opinions in the committee,” ranging from the more dovish views of Minneapolis Fed president Narayana Kocherlakota to the more hawkish views of Dallas Fed president Richard W. Fisher.

Stock markets reacted positively to the dovish statement, but not without some gyrations as they tried to assess the FOMC’s thinking on interest rate hikes during Yellen’s press conference.

The Canadian dollar weakened slightly against the U.S. dollar, as did the euro, pound sterling, and yen. U.S. and Canadian bonds sold off slightly after the Fed. But bond yields are notably lower (prices higher) since the prior FOMC statement at the end of October.

Rahul Vaidyanath is a Chartered Financial Analyst (CFA) with 15 years of capital markets experience. He has worked in the Financial Markets Department at the Bank of Canada and as a mortgage bond trader in the U.S. Follow him on Twitter @RV_ETBiz