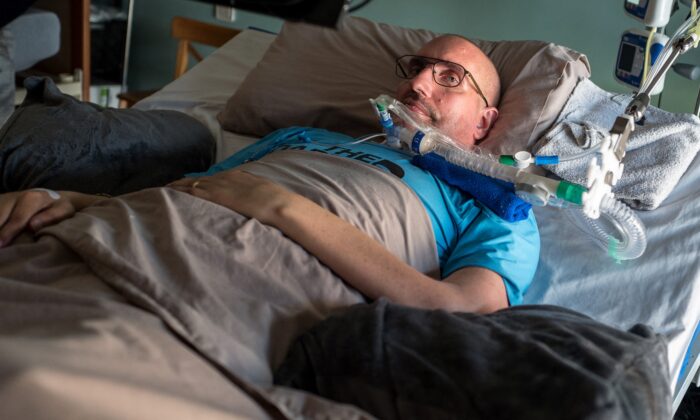 Guilhem Gallart, known as Pone, lies on a bedat his home in Gaillac in the south of France on June 16, 2021. Since 2015, he suffers from amyotrophic lateral sclerosis. (FRED SCHEIBER/AFP via Getty Images)
Medicine

The drug, which mixes an approved liver disorder medication and traditional Chinese dietary supplement, has been shown to extend life expectancy
By Mimi Nguyen Ly

A panel of external advisers to the U.S. Food and Drug Administration (FDA) voted on Sept. 7 to recommend a drug from Amylyx Pharmaceuticals to treat amyotrophic lateral sclerosis (ALS), also known as Lou Gehrig’s disease or motor neuron disease.

ALS is a progressive and fatal disease that has no known cure. It is a neurodegenerative disease, destroying nerve cells that are needed for basic functions like walking, talking, swallowing, and eventually breathing. The cause of ALS is largely unknown. The average life expectancy after diagnosis is two to five years.

The panel’s vote to recommend FDA approval comes after the same group in March voted to reject the same Amylyx drug—an oral drug called AMX0035. The drug comes as a powder that combines two older drugs: one prescription medication for liver disorders and a dietary supplement used in traditional Chinese medicine. The drug is approved under the name “Albrioza” with conditions to treat ALS in Canada.

At the time, six of the 10 members of the panel—the FDA Peripheral and Central Nervous System Drugs Advisory Committee—determined that the data was insufficient to warrant FDA approval. They noted a lack of “substantially persuasive” data and also cited concerns about missing data and other issues in the company’s lone study, a mid-stage trial.

Amylyx has since provided new statistical analyses from follow-up data gathered after the study that estimated the drug could extend life expectancy by nearly 10 months compared with a placebo. The company also provided biomarker data from a study in Alzheimer’s disease. That prompted the FDA to defer its decision.

In a rare second meeting on Sept. 7, the same panel of FDA advisers voted 7–2 to recommend the drug, saying that the data from Amylyx is now sufficient to support FDA approval. The vote came after hours of debate about the strength and reliability of the single trial.

Those who voted to recommend the drug cited the unmet need for more treatments against ALS, and noted that data from the study, along with the drug’s mild side effects, suggests there would be minimal negative implications for patients even if it doesn’t ultimately slow ALS.

The FDA is not required to follow the recommendation. The positive recommendation, however, suggests that an FDA approval may be likely later in September. The FDA is expected to make a final ruling by Sept. 29.

The second meeting by the FDA panel included a lengthy public comment period where more than 20 ALS researchers, caregivers, patients, and their family members urged for an FDA approval of the drug without delay.

ALS patients and their families have rallied behind Amylyx’s drug and had launched a lobbying campaign calling on congressional lawmakers to push the FDA to grant approval.

The FDA has received more than 1,200 written comments, largely from ALS patient advocates.

Billy Dunn, the director of the FDA’s Office of Neuroscience, opened the meeting on Sept. 7 by detailing the “concerns and limitations” with Amylyx’s data, while emphasizing the “urgent need” for new treatment options. He noted that a larger Amylyx study being conducted in the United States and Europe could provide “more definitive results” by 2024.

Dunn suggested that the FDA might be more willing to approve the drug if Amylyx would commit to withdrawing its medication if the ongoing 600-patient trial fails to show a benefit. He then called on the company’s co-founders to publicly commit to that step, and Amylyx co-CEO Justin Klee said the company would voluntarily withdraw its drug in that scenario.

Currently, there are only two treatments for ALS that are FDA-approved: Rilutek (riluzole) and Radicava (edavarone).