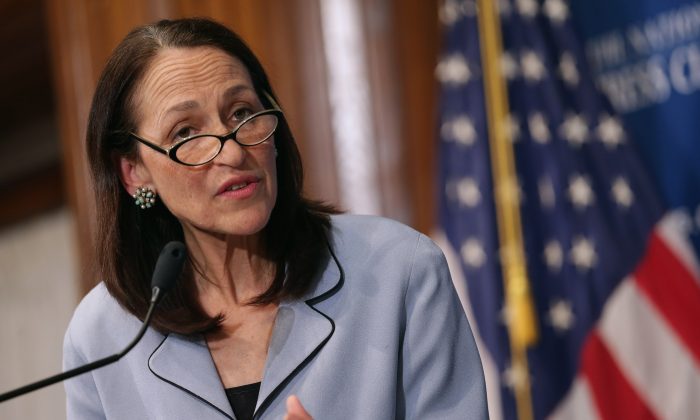 The outgoing Commissioner of the U.S. Food and Drug Administration Dr. Margaret Hamburg speaks during a National Press Club Newsmaker Luncheon at the National Press Club in Washington, D.C., on March 27, 2015. Hamburg has served as the FDA commissioner since May of 2009. (Chip Somodevilla/Getty Images)
Health

WASHINGTON—Federal officials are ordering the recall of nearly 2,800 machines used to disinfect medical scopes. They blamed company violations that could lead to infections in patients.

The Food and Drug Administration said Friday that Custom Ultrasonics must recall all of its endoscope reprocessing devices, which are currently used at hospitals and medical clinics throughout the U.S. The devices are intended to kill bacteria and microorganisms found on flexible endoscopes after hospital procedures, so that they can be re-used safely. But the Warminster, Pennsylvania-based manufacturer has a history of violating federal rules for manufacturing and quality control.

The agency ordered the action under terms of a 2007 legal settlement with the company. The settlement bars the firm from making or distributing the machines. Custom Ultrasonics has continued to service the machines.

But FDA inspectors uncovered ongoing problems with the company’s technology during an April inspection. Inspectors said the company still cannot show that its devices adequately wash and disinfect endoscopes.

“The FDA’s recall order stemmed from the company’s continued violations of federal law and the consent decree and is necessary to protect the public health,” said Dr. William Maisel, the FDA’s deputy director for medical devices.

A consent decree is a form of legal settlement in which a company agrees to court-ordered actions without admitting fault or guilt. The decree generally remains in effect until the FDA determines the company has fixed the problems.

The FDA says hospitals and medical facilities should switch to alternate machines to avoid possible infections.

The announcement follows a series of life-threatening bacterial outbreaks that have been tied to medical scopes at hospitals across the U.S.