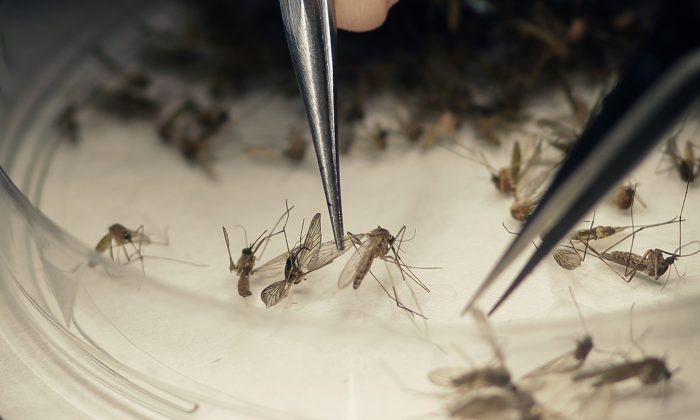 FILE-In this Feb. 11, 2016 file photo, Dallas County Mosquito Lab microbiologist Spencer Lockwood sorts mosquitos collected in a trap in Hutchins, Texas, that had been set up in Dallas County near the location of a confirmed Zika virus infection. The quest for a vaccine began less than a year ago as Brazil’s massive outbreak revealed that Zika, once dismissed as a nuisance virus, can harm a fetus' brain if a woman is infected during pregnancy. (AP Photo/LM Otero, File)
US

FDA Expands Zika Screening to All US Blood Centers

Previously, blood testing was mostly limited to parts of Florida and Puerto Rico, where Zika is spreading. Screening will initially extend to states along the Gulf Coast and a few others.

“There is still much uncertainty regarding the nature and extent of Zika virus transmission,” Dr. Peter Marks said in a Food and Drug Administration release. “At this time, the recommendation for testing the entire blood supply will help ensure that safe blood is available for all individuals who might need transfusion.”

Blood banks already test donations for HIV, hepatitis, West Nile and other blood-borne viruses. The Zika virus stays in the blood for about one week, but is thought to remain in other bodily fluids longer.

While Zika is primarily spread through mosquito bites, there have been reports in Brazil of Zika transmission through transfusion. No such cases have been reported in the United States. One Zika-positive blood donation, though, was recently intercepted in Florida, Marks said Friday.

“The donation was identified while the blood bag was still in quarantine, before it was released,” Marks told reporters on a media call. “The system worked correctly.”

Adding to the challenge is that 4 out of 5 people infected never develop symptoms, such as fever, joint pain and rash.

The Centers for Disease Control and Prevention on Friday reported the first U.S. case of a man spreading Zika through sex even though he never had any symptoms. The Maryland man had traveled to the Dominican Republic, one of the many countries in the Caribbean and Latin America hit with a Zika outbreak.

There have been nearly 2,500 cases of Zika in the U.S. linked to travel to outbreak areas. Since February, blood banks have turned away people who had recently visited those regions, under a previous FDA directive.

While the virus causes only a mild illness in most people, infection during pregnancy can lead to severe brain-related birth defects.

Blood testing began last month in parts of Florida after the first cases of homegrown Zika occurred in Miami. So far, there have been about 40 cases of Zika caused by mosquito bites in Florida. Health officials, however, don’t expect widespread outbreaks to occur in the U.S.

The FDA has authorized use of two experimental blood screening tests for Zika, one made by Roche and another from Hologic Inc. and Grifols. Several testing sites are already voluntarily using the technology, including blood centers in Texas. The cost of adding Zika testing to the screening process is less than $10 per blood donation, according to officials at South Texas Blood and Tissue Center.

FDA officials said they do not anticipate any problems supplying the tests throughout the U.S.

The tropical mosquito that spreads Zika and other viruses is found along the southern U.S. Friday’s directive lists 11 states that will need to begin screening blood in the next month because of their location or because of the influx of travelers from Zika outbreak countries.

All other U.S. states and territories will have three months to comply.

An executive for America’s Blood Centers, which has more than 600 locations in the U.S. and Canada, warned that the amount of work needed to comply with the FDA’s timeline is “titanic.”

“Testing labs and the test vendors are working feverishly to allow testing to start on time in the areas subject to the 12 week timeline,” said Dr. Louis Katz, in an email.

The FDA works with other federal agencies to set standards for screening, testing and handling blood donations. Blood banks and donation centers adhere to those guidelines.