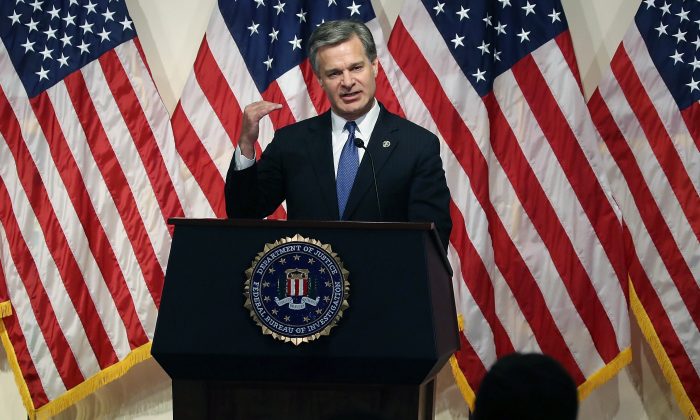 FBI Director Christopher A. Wray speaks to the media during a news conference at FBI Headquarters, on June 14, 2018 in Washington. (Mark Wilson/Getty Images)
US News

In this year alone, the FBI has rescued 1,305 children from child predators, FBI Director Christoper Wray said in a June 14 statement.

Each year, thousands of children across the United States fall victim to sexual abuse. Worldwide, more than 1 million children are currently being sexually exploited, according to estimates by the International Labor Organization.

Countering the threat of child predators and the freeing of abused children have been key points of focus of the Department of Justice (DOJ) under the Trump administration.

Last week, the DOJ announced it had arrested more than 2,300 suspects of child sexual abuse and trafficking in a major nationwide operation.

“Any would-be criminal should be warned: This Department will remain relentless in hunting down those who victimize our children,” Attorney General Jeff Sessions said in a statement following the arrest of the 2,300 suspects.

Child sexual abuse has seen a sharp rise in recent years, in part fueled by the easy access children have to the internet. Predators win children’s trust through the use of personal information the children have posted on social media.

“It’s an unfortunate fact of life that pedophiles are everywhere online,” said special agent Greg Wing, who supervises a cyber squad in the Chicago Field Office, in an earlier statement by the FBI.

“The younger generation wants to express themselves, and they don’t realize how vulnerable it makes them,” Wing said. “For a pedophile, that personal information is like gold and can be used to establish a connection and gain a child’s trust.”

In recent months, the DOJ has also targeted American nationals who travel overseas to sexually abuse children. Among those convicted was Paul Alan Shapiro, 71, a retired auto dealership employee who lives in Los Angeles. Shapiro was sentenced to 10 years in prison for sexually abusing minor boys in Thailand.