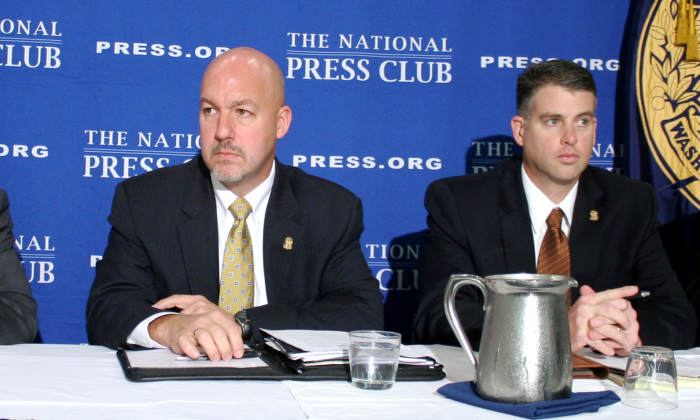 FBI Operations Hamstrung by Sequester in 2014

WASHINGTON—FBI agents said that the mandated sequestration cuts in 2014 will compromise daily operations, criminal and national security investigations, and the training of agents.

Members of the board of the FBI Agents Association (FBIAA) answered questions Dec. 4 at the National Press Club’s Newsmaker media briefing to warn of the impacts of a $700 million budget cut unless Congress acts.

“Some of the mission critical operational needs is not going to be met, and on top of that, we are probably going to be looking at furloughs as well,” said Reynaldo Tariche, FBIAA president.

The FBIAA is a voluntary organization made up of over 12,000 current and retired agents that’s mostly involved in charity work and assisting agents’ families. FBIAA released a report at the news conference, “Voices from the Field: FBI Agent Accounts of the Real Consequences of Budget Cuts.”

The first year of the sequestration, fiscal year 2013, the FBI took a big hit. Former FBI Director Robert Mueller told The Associated Press in February, “The loss of work years from the furloughs and hiring freeze … is the equivalent of shutting down three of the FBI’s largest field offices—Chicago, Miami, and Baltimore.”

Already, 2013 cuts are “affecting current investigations and in some cases preventing us from opening new investigations,” stated the report. This year, Tariche said, the FBI was able to find resources and make adjustments, but he said that it has run out of options and won’t be able to avoid furloughs in 2014.

The conditions under which the bureau is operating are harsh: frozen pay, a hiring freeze, and no training funds for agents assigned to new duties.

Nonetheless, the four agents speaking at the news conference said that morale remains high and will continue to remain high despite the adversity.

Thomas O’Connor, from the Washington field office, said that agents gave an enormous number of hours to the Navy Yard shooting, but morale “is extremely high.” The agents still came every day to the Navy Yard, despite the government shutdown and not knowing whether they would be paid. Their mission to protect the people of the United States overrides any concerns they would have about the budget cuts, he said.

John Fegan, from the Baltimore office, said that agents in the Baltimore area are used to dealing with obstacles. Budget cuts are regarded as another obstacle to their work. He said, “We are going to be there no matter what.”

‘Voices From the Field’

In the “Voices” report, FBI special agents describe the impact of budget cuts on their work.

Unfortunately, the contributors are anonymous, the field offices not identified, and the report has no statistics that could objectively measure the budget impact. When asked for something more than anecdotal evidence such as statistical data, Tariche said he had none and wasn’t sure whether FBI headquarters had any either.

Nonetheless, the impact statements from field offices on FBI operations are cogent. The statements together make a strong appeal that without the resources it needs, the FBI will have to cut back on vital services.

One agent said that ammunition carried daily is no longer replaced at the quarterly firearms training but only once a year at the field office. The agent wrote, “The amount of firearms training for skill development and/or skill maintenance has been decreased directly due to the limited supply of ammunition and targets.”

This agent lamented the absence of simulated realistic deadly force training situations, which they had before.

“The face of the sequester is a molested Navajo child or a beaten Apache woman,” the agent wrote.

The current budget cuts are affecting the number of counterintelligence (CI) cases the FBI takes. One agent said in the “Voices” report, “We have approximately 10 very important CI cases that we would open … but we can’t open them because we don’t have the [special agents] to work the investigations and the other agents on the squad already have full caseloads. … It will only get worse with furloughs.”

Working on white-collar crimes will be impacted. “The hiring freeze has prohibited our team from adding new agents to combat the significant surge in investment fraud and mortgage loan modification fraud,” wrote one agent. Victims lose their homes and life savings because of these schemes.

This agent wrote that new instances of loan modification fraud were identified recently, but they haven’t the resources to address the schemes.

At the news conference, the agents gave personal accounts of what the cuts will mean. They spoke of the considerable interaction FBI agents have with state and local law enforcement and the services the FBI provides them.

Tariche said that the FBI receives, on average, 50,000 fingerprint requests daily from law enforcement partners from around the nation. They may not be able to be as responsive as they have been in the past.

O’Connor said that agents get to know the local enforcement people through the special training they provide. He fears that both the FBI and local law enforcement will be hurt when training is cut, which is almost inevitable with a $700 million cut.

“The times to introduce yourself is not on a 9/11 or a Navy Yard event. You should already know the people you are working with, have trained with them, and that, I think, is something very important we may be missing in the future with these cuts,” O’Connor said.