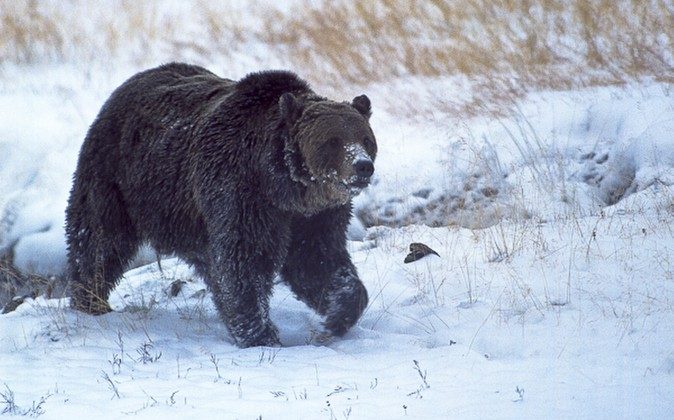 FILE - In this Oct. 2005, file Well-known Yellowstone National Park grizzly bear known as "Scarface." Montana wildlife officials have confirmed that the grizzly bear was shot and killed during a confrontation with a hunter north of Gardiner last fall. (Ray Paunovich via AP)
US

“Scarface” is a fitting name for the most well-known Grizzly bear that roamed the vast lands of Yellowstone National Park, Wyoming.

Although he bore several large scars on his face and had a damaged right ear, Scarface made it through 25 years in the park, which makes him elderly for a grizzly. He was formally known by the parks department as No. 211.

But in November last year, Scarface was fatally shot by a hunter just outside the park’s northern tip by Gardiner, Mont., according to a statement by the Montana Fish, Wildlife and Parks Department (MFWPD) last week.

“No. 211 was recognizable because of distinctive scars on the right side of his face likely the result of typical fights with other male grizzlies for females during mating season or to claim deer and elk carcasses,” the statement said.

“No. 211 was known to many photographers and wildlife watchers. For this reason, his life was often documented in the media.”

The MFWPD said the bear had first been captured in 1993, weighing just 150 pounds. At his heaviest, he was roughly 600 pounds. The department noted less than 5 percent of male grizzly bears “born in the Greater Yellowstone Ecosystem” make it to 25 years old.

In the fall of 2015, it was predicted that Scarface wouldn’t make it through the winter—he had lost a lot of weight in his old age, falling to just 338 pounds.

According to Yellowstone Park’s website, Scarface would’ve been preparing for his 5-month hibernation around the time he was shot.

Scarface’s death sparked an investigation by the U.S. Fish and Wildlife Service (FWS).

“The grizzly bear is protected by both the federal government and the State of Montana as a threatened species,” the FWS said. “The Service routinely investigates incidents affecting threatened and endangered species and is conducting an investigation with the assistance of Montana Fish, Wildlife and Parks.”