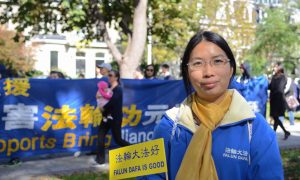 A Story of Persecution and Persistence in Modern-Day China
0 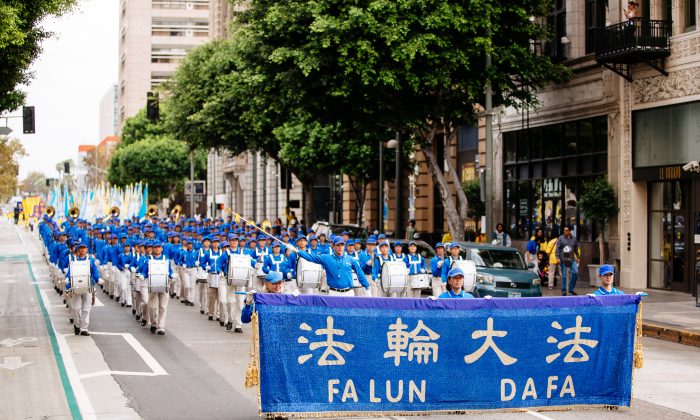 The Divine Land Marching Band performs during a parade calling for an end to the persecution of Falun Gong in China, in Los Angeles on Oct. 15, 2015. (Edward Dye/Epoch Times)
Falun Gong

About 1,000 practitioners of Falun Gong marched from City Hall to Pershing Square in downtown Los Angeles on Oct. 15 in a parade to raise awareness about the Chinese communist regime’s brutal persecution of the spiritual practice in China.

Anne Lu from Memphis explained why these individuals had come together from all over the United States and from several countries around the world.

“I want people to know what’s happening in China,” she said.

“We try to cultivate according to the law of truthfulness, kindness, and tolerance. That’s the guidance for our actions. Every thought and everything we do, we bind to that principle.”

Also in the parade were several motorized floats on which Falun Gong practitioners gave a demonstration of the rounded, slow-moving exercises. On the sidewalk, other practitioners handed out literature about the practice and its persecution to passersby.

Falun Gong, also known as Falun Dafa, is a traditional Chinese meditation practice that involves five sets of exercises, and moral teachings of truthfulness, compassion, and tolerance. First taught in China in 1992, there were an estimated 70 million Chinese doing Falun Gong’s gentle calisthenics in parks and public squares by 1999, according to figures provided by the Chinese authorities. Falun Gong sources said there were more than 100 million people who had taken up the practice.

On July 20, 1999, however, former Communist Party leader Jiang Zemin launched a campaign to eradicate Falun Gong. A Gestapo-like extralegal organization, the 610 Office, named for the day of its creation, June 10, spearheaded the effort to get Falun Gong adherents to give up the practice—or face dire consequences.

To date, over 3,900 Falun Gong practitioners have died from torture and abuse, according to data from Minghui.org, a website that tracks and carries information of the persecution. Hundreds of thousands have been detained. Researchers say that tens of thousands of Falun Gong practitioners have had their organs harvested while still alive, killing them.

Unfortunately, in the United States and the West, the “average person on the street hasn’t heard” of the persecution of Falun Gong, said James White, a Falun Gong practitioner in the parade.

White, 37, read “Zhuan Falun,” the main text of Falun Gong’s teachings, while studying at the University of Pennsylvania in 2004. He currently lives in Los Angeles.

“Not only your body becomes healthy, your whole perspective of life becomes hopeful,” Lu said.

Nate Gaefcke, 33, from St. Louis said he attended the parade and rally because a lot of “people don’t know what’s happening, so I think it’s very important for all of us to get together and continue to raise awareness until the persecution can stop.”

Gaefcke, who said he’s been practicing the Falun Gong exercises for 3,5 years now, attributes the improvement in his overall well being to the practice.

“I used to suffer pretty heavily from anxiety and depression and things of that nature. After studying and cultivating, the little things that used to bother me, they don’t bother me anymore,” he said.

Over the past 16 years of persecution, practitioners of Falun Gong around the world have called on government officials to speak out against the atrocities committed in China.

“We need to keep on working with our government officials and make sure more and more people know about this so it ends sooner,” said Katherine Combs, 70, who came from Montana to attend the events.

Since a change in China’s legal regulations in May this year, over 180,000 Falun Gong adherents have filed criminal complaints with China’s highest legal bodies against Jiang Zemin for crimes against humanity.

“It’s absolutely horrific what the Chinese Communist Party has done to practitioners. They need to be held accountable for it, and that’s why we’re suing the former leader Jiang Zemin,” said Combs.

A rally was held after the parade in Pershing Square. Several practitioners from mainland China gave brief accounts of the abuse and torture they and their family members suffered.

One of the speakers at the rally, civil rights attorney Lisa Bloom said that she was inspired by the large number of people attending the parade.

“Each and every one of you here today is a great inspiration to me. The freedom to practice a religion or spiritual practice is a universally recognized human right,” said Bloom, who also contributes as a legal analyst for NBC News and lawyer database Avvo, and founded The Bloom Firm, a legal practice.

The persecution of Falun Gong is unacceptable, she added.

“The popularity of Falun Gong, the [Communist] Party’s antipathy toward spirituality, and the conflict between its political ideology and Falun Gong’s principles of truthfulness, compassion, and tolerance, were the primary reasons for the persecution, and it continues to this day,” Bloom said.

“This is unacceptable. How can anyone feel threatened by truthfulness, compassion, and tolerance?”

Joan Collins, Board Director of United Nations Association of Beverly Hills, urged attendees at the rally to spread word of the persecution on social media.

Collins said that she was shocked about the fact that she hadn’t heard about the persecution until earlier this year. She now wants to let the rest of the world know about it.

“We are here to shine a big light on this,” Collins said at the rally.

She encouraged the rally attendees to take videos and post them on social media. “A lot of people in China don’t have the opportunity to go on social media like the rest of us do,” she said.

Rida Hamida, field representative from the Office of Congresswoman Loretta Sanchez, presented a certificate of recognition to the participants in the rally. “I would like to recognize the United States Southwestern Falun Dafa Association with a recognition of human rights by Congress,” she said, reading from the certificate. “So I join with Congress and the people of the 46th Congressional district in recognizing your commitment to advocating on behalf of the persecuted Falun Gong practitioners. I applaud your efforts for upholding the human rights to freedom of expression.”

Hamida added: “What a great group of people. To show your power is to show your unity.”

Dr. Vo Dinh Huu M.D., President of Federation of Vietnamese American, shared his sense of the similarities between the struggle of Vietnamese people for human rights and that of the Falun Gong community. “Forty years ago, we left Vietnam after Vietnam turned communist to come to America searching for freedom and human rights. After 40 years, in Vietnam there is no democracy, no human rights, and it’s still communist, and we’re still fighting for that. Today I come here to see our brothers and sisters from China suffer the same thing,” he said. “We must demand the international community interfere to restore human rights inspection with respect to China. We should have religious freedom.”

The Oct. 15 parade and rally was the first in a series of events—a candlelight vigil, exercise demonstrations, another parade, and an experience sharing conference—planned over a three-day period in Los Angeles and attended by Falun Gong practitioners from around the world.

Sarah Le and Jonathan Zhou contributed to this report.

This article has been updated to reflect the correct number of participants in the parade.