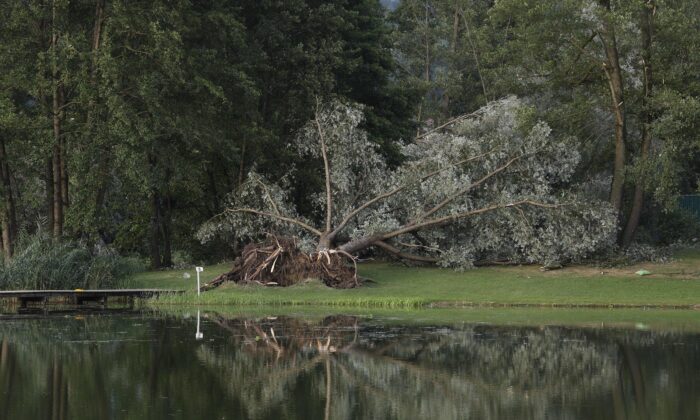 A fallen tree after a severe storm at Saint Andrae lake in the Lavant valley near Klagenfurt, Austria, on Aug. 18, 2022. (Erwin Scheriau/APA/AFP via Getty Images)
Europe

VIENNA—Falling trees killed five people in Austria in two separate incidents on Thursday as storms that battered the Mediterranean Sea’s northern shores earlier in the day reached the Alpine country in the afternoon.

Two girls aged four and eight died when trees on the edge of a lake near the town of St Andrae in southern Austria, close to the border with Slovenia, collapsed, police said.

The storm with gusts of more than 100 kmph (62 mph) appears to have surprised bathers cooling off at the lake on a hot day, despite two people having been killed in Italy earlier in the day when storms felled trees there.

Heavy storms caused power outages that forced Austria’s national rail company OBB to halt all train services in much of the southern provinces of Styria and Carinthia, which border Slovenia and Italy, OBB said in a statement. Many roads in Styria and Carinthia were also closed, a drivers’ group said.

Three people were also killed by a falling tree in the area of the town of Gaming in Lower Austria, the province that surrounds Vienna, a police spokesman said, declining to provide further details. It was unclear whether the tree was felled by lightning or strong winds, he said.