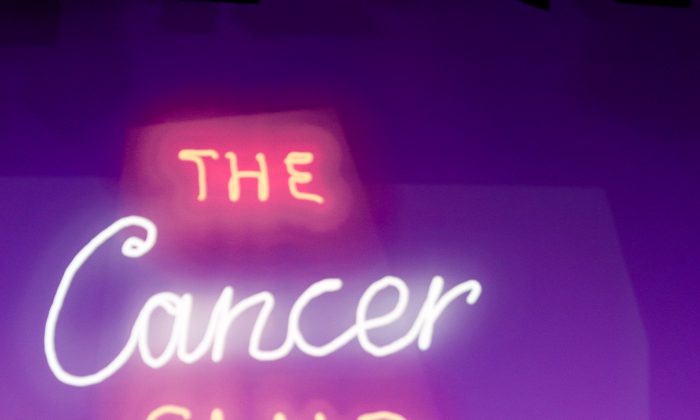 Toby Peach relives the moments when he was diagnosed with cancer twice, at 19 and 21, in his solo show “The Eulogy of Toby Peach” that he recently performed in the West End, London. (Courtesy Toby Peach/(c)Richard Davenport)
Good to Know

There are few things more terrifying in life than cancer: when your cells malfunction and gang up on you, when you lose your hair through chemotherapy. All while dealing with daunting and unfathomable emotions—unfathomable, that is, for anyone who has not lived with it.

Yet cancer affects so many—nearly one in four deaths in the United States are caused by it, according to the American Cancer Society. It is the second most common cause of death in the nation, exceeded only by heart disease.

And while we can offer a pill for the pain after surgery, or the nausea and vomiting after chemo, there is no prescription for the kind of support a loved one can offer. Unfortunately, even when all we want to do is help, without fully understanding a person’s mindset or experience, we may have the opposite effect instead.

Often, cancer is portrayed as a battle and those who make it through attain the status of survivor.

“As long as they can own the fight, some people really like [the ‘fight’ metaphor], and they get behind it and fight it. But it’s not to assume that that’s right for everybody,” said psychologist Lesley Howells, who heads a local branch of Maggie’s, a cancer support charity in the U.K.

For many, the heroism in this metaphor does not reflect their experience of cancer.

“We talk about fighting and battling quite a bit,” said Toby Peach, a theater actor, writer, and director who was diagnosed twice with Hodgkin’s lymphoma. “I found that quite strange because it sounds like I’d done something and that I should be congratulated for beating cancer twice.”

But Peach said he didn’t do anything. “I just sat there, and I got pumped with drugs, then said yes to the things that they said they would give me.”

Angela Kearne, a counselor who lost her mother to cancer, said the battle metaphor doesn’t resonate with many of her clients.

“The language—’victim of, survivor of, the battle with’—that language I find problematic. Talking to clients, they share that they don’t feel like they’re battling,” she said.

The fight metaphor means if you can’t fight that day, you’re failing and there’s something wrong with you.
— Lesley Howells, psychologist

And for some people, this language may contribute to feelings of failure.

“The fight metaphor means if you can’t fight that day, you’re failing and there’s something wrong with you,” Howells said.

Often, people with cancer don’t feel they are an inspiration—they’re not marathon runners, for example, said Howells. “Many people just want to be normal again.”

After being diagnosed, one of the hardest things cancer patients face is uncertainty.

“We tend to live in the future, in our hopes and our plans, and to be placed in a position where you can’t plan your future is extraordinarily difficult. People hate living in limbo,” Howells said.

“There’s a whole array of emotions and thoughts, which are perfectly natural for any human being to experience when you are adjusting to something that you can’t change.”

And the end of successful treatment is still not the end of limbo, Kearne said.

Even when the cancer does not recur, people are still left dealing with long-term impacts of treatment.

Even when the cancer does not recur, people are still left dealing with the long-term impacts of treatment.

“They are having to live with the practical impact, emotional impact, treatment impact, long-term treatment, living with the long-term physical implications of the treatment,” Howells said.

But cancer is also inherently transformative. It can be a catalyst for change, causing people to re-evaluate what is important in their lives or how they want to live. As a result, they often find greater meaning and purpose.

The Reality of Cancer

The funniest thing is—now I think it’s funny, I didn’t then—my well-meaning colleague said: “Of course you being a Cancerian, with your birthday in July, and now you have cancer, how do you feel about that?” Some of the things people come up with, honestly! I’m meant to feel bad about that? If I’d had any eyebrows at the time, I think they would have fallen off, but chemotherapy had already taken them.

I was diagnosed with breast cancer in May 2011. I can’t remember the exact day; I don’t want to remember it. When I was diagnosed, I was shocked that I got it so young, but relieved that I had listened to my body and had an inkling at what was wrong.

On one level you think you’re dealing with it, but you’re just getting through life. I do a lot of community work within cancer communities. There was so little support for people struggling with their emotions or who had mental health issues.

When my radiotherapy ended, I remember sitting in Carluccio’s in South Kensington sipping hot chocolate, feeling utterly shellshocked. It was this numbness, you know. Your whole life stops for nine months, every day is dictated by something medical. Now it wasn’t. I could do anything I wanted, but my body felt too tired to do anything.

The reason why I shied away from talking about cancer is partly for sympathy reasons. I didn’t really want sympathy. As soon as you say you’ve got cancer they say, “Are you okay?” So I hid from that, I hid the scars, I wanted to be Toby Peach, just that. It took me a long time to realize that that was not possible, because you can’t run away from that.

The reality was I was never just going to get rid of my scars, I had to accept them, and I always say a very corny line: “It’s not about how we get our scars, it’s about how we wear them in our day-to-day lives. That’s the thing that defines us.”

The first time I was diagnosed with Hodgkin lymphoma was when I was 19, and then I was diagnosed again at 21. I look back at it as a time I blocked out for a long time. I didn’t really talk about it. I did what a lot of young patients do—I tried to be OK.

I realized that it was part of me, I couldn’t hide it. After three years of not talking about it, I’m now shouting from the rooftops about my experience, through my theater show “The Eulogy of Toby Peach.”

I didn’t really have the emotional maturity to take on board what was happening when I was diagnosed with chronic myeloid leukemia at age 18. I didn’t know what blood cancer was, and within a couple of hours, I was being asked significant questions about life and death. It was all a bit surreal.

My overwhelming feeling at diagnosis was one of guilt, because my mum had been diagnosed with terminal bowel cancer just three months earlier.

Looking back, I was really scared, too, but I didn’t want to give my mum any more reason to be worried or upset, so I adopted the role of being strong right from the get go.

During treatment, you want to know what you can do to help. However, bar not doing anything stupid like not taking your medication, there isn’t really a great deal that you can do. You feel powerless and out of control.

Afterward, I was determined to give something back. That’s why I fundraise and do a job that helps support patients and get them access to the information they need to get through their own blood cancer journeys.

Having cancer is not a club that you want to be in, but there’s this real sense of community that emerges from it, which can be a really powerful, positive thing.

The doctor said, “Do you want me to tell you now, or do you want me to wait for your mum?” Mum came in a little while after and I just burst into tears and they hadn’t even told me anything yet.

I reckon I sensed what I was going to be told, although I didn’t even think about having cancer. Cancer didn’t enter my mind until the doctor said it. It was devastating. At that age—I was 26—you equate cancer with dying.

No, I would not want cancer ever again; however, it did make me re-evaluate life and what’s important. That’s one of the things that’s changed about me, now being more aware of what I’m complaining about. It could be much worse.