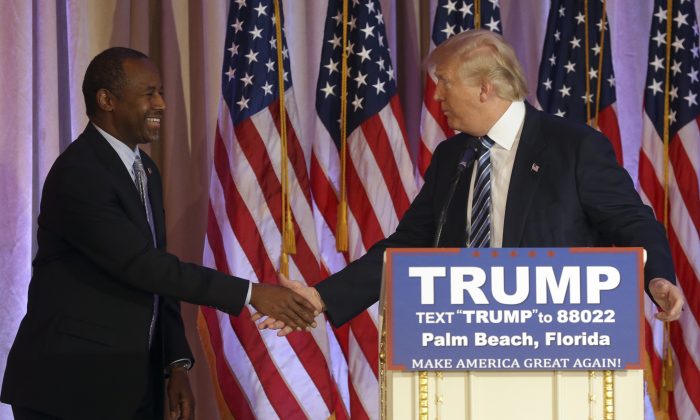 MIAMI—Candidates shuttled out of Florida and abandoned their vicious rhetoric—at least with each other—as central front in the increasingly desperate push to stop Donald Trump shifted Friday.

Instead, the anti-Trump movement shifted to the streets of Chicago, as protesters and supporters gathered at an arena where he was scheduled to speak. The Trump campaign finally canceled the rally, citing safety concerns.

The tone among the GOP rivals changed, though. No longer was Marco Rubio insulting Trump’s hair or hand size. And there was no sign of Trump’s references to “Little Marco” or “Lying Ted.”

A confident Trump instead adopted a magnanimous tone, calling for party unity, while Rubio focused on policy differences and turned to Republican competitor John Kasich for help, as the Republican front-runner’s rivals—and the party’s establishment—grasped for any way to slow Trump’s march toward the nomination.

“Clearly John Kasich has a better chance of stopping Donald Trump in Ohio than I do,” Rubio told reporters on Friday, encouraging his supporters in Ohio to vote for Kasich next week.

The extraordinary tactic reflects the increasing sense of urgency looming over the 2016 contest as Trump eyes what would be a devastating sweep in next week’s winner-take-all elections in Ohio and Florida.

In all, 367 Republican delegates are at stake Tuesday in Florida, Illinois, Missouri, North Carolina, Ohio and the Northern Mariana Islands. A win in either Florida or Ohio, some fear, could give Trump an insurmountable delegate lead.

Polls, and the candidates’ travel schedules, suggested that Kasich’s chances in Ohio may be better than Rubio’s in Florida.

Rubio claimed fresh momentum in the state as he campaigned there Friday, but his rivals left him alone in Florida as the day progressed, preferring to campaign in more competitive territory across the Midwest as the Florida senator’s grasp on his home state appeared to be slipping.

Before heading to Missouri, Trump introduced a significant new ally at a news conference at his Palm Beach resort: retired neurosurgeon Ben Carson, who endorsed his former GOP rival and warned that a failure to rally behind him would “fracture the party in an irreparable way.”

Carson said that he and Trump had “buried the hatchet” after months of political wrangling, describing the front-runner as a “very cerebral” person.

Texas Sen. Ted Cruz, the other candidate in the four-man Republican race, embraced the shift toward civility during his lone Florida appearance before heading to Illinois. The fiery conservative’s team desperately wants Rubio and Kasich to lose their home state contests next week, which would likely force both to leave the race and allow Cruz to go after Trump one-on-one.

Even under that scenario, the delegate math would make it difficult for Cruz to overtake Trump before the party’s July convention.

Meanwhile, Trump repeated his calls for party unity on Friday. But tension was brewing at the University of Illinois at Chicago Pavilion, where he had a rally scheduled Friday night.

After large groups of protesters packed the arena, Trump called off the event. He told MSNBC he didn’t “want to see people hurt or worse,” adding, “I think we did the right thing.”

Earlier Friday, he called a violent episode at a rally the day before “very, very appropriate” after an African-American protester was punched in the face by a Trump supporter.

“That’s what we need a little bit more of,” Trump said.

Police charged the attacker, identified as John Franklin McGraw, with assault. Florida police are investigating another allegation of violence against a Trump protester from earlier in the month as well.

Looking at the Ohio primary, there are signs some local Republicans are already embracing Rubio’s call to support Kasich.

“I believe Marco Rubio has the best chance of unifying the party and winning in November,” said Tom Grossmann, a county commissioner and Rubio supporter. “I don’t think he has any chance of winning in Ohio.”

Kasich spokesman Rob Nichols charged that his candidate is going to win in Ohio without Rubio’s help “just as he’s going to lose Florida without our help.”

Amid the Republican wrangling, Democrat Hillary Clinton is campaigning in Illinois and warning voters about the perils of loose talk.

Without mentioning Trump by name, Clinton said Friday that “when you run for president, it matters what you say.”

In the last few weeks, Clinton said, she’s been getting messages “from a lot of the leaders I know from around the world and their message basically is, ‘What is happening?'”

“Hopefully this is just a momentary lapse and that we will all come to our senses” and have an election based on ideas and who can get things done,” she said.

But Trump on Friday softened his tone, a shift that was apparent on stage at the previous night’s debate: “I can’t believe how civil it’s been up here,” Trump declared at one point in Thursday’s face-off of the GOP’s final four.