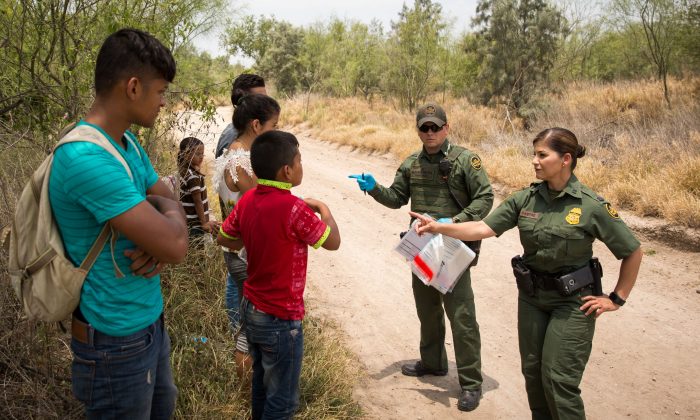 Border Patrol agents have aliens remove their shoelaces and belongings before loading them in a van for transport in Hidalgo County, Texas, on May 26, 2017. (Benjamin Chasteen/The Epoch Times)
Politics

After Yale researchers estimated there are perhaps 22 million illegal immigrants in the United States, multiple immigration think-tanks blasted the study for flawed methodology. But the authors have pushed back.

The study estimated that there are 12-37 million illegal immigrants in the country, with a conservative estimate of 16.7 million and an average estimate of 22.1 million.

Multiple expert groups, including those of the Homeland Security Department (DHS), have for years estimated the number to be about 11-12 million (pdf).

The old estimates used the “residual” method, where the number of legal immigrants is subtracted from the Census Bureau count of all immigrants. The result is then corrected upwards for under-reporting as illegal immigrants are more likely to be missed or avoid census counts and surveys.

The new estimate starts from a 1990 baseline of 3.5 million illegal immigrants, which has been somewhat validated by how many took advantage of the 1986 immigration amnesty. The researchers then estimated how many people illegally crossed the borders, overstayed their visas, were deported, left the country on their own, gained legal status, or died.

The study was published in the PLOS One journal on Sept. 21.

The same day, the journal also published a commentary by four researchers from the Migration Policy Institute (MPI) think-tank.

The commentary stated the new study was flawed because, among other issues, it improperly used 2005-2010 DHS estimates to count successful border crossers in the 1990s.

“In the 1990s, many migrants crossed multiple times in the same year, or they came for just a year or two before permanently leaving,” the researchers noted in an MPI article. “Back then, illegal crossers faced few consequences, so little deterred them from coming, leaving, and returning again.”

The MPI argued that by counting each repeated entry as a new illegal immigrant, the new study overcounted.

However, the MPI argument of “few consequences” at the border in the 1990s has it’s problems too. At the time, Border Patrol doubled its force and was catching 1 million to 1.5 million border crossers a year, compared to some 400,000 in 2016.

Still, the Center for Immigration Studies (CIS), a think-tank which advocates a “low-immigration, pro-immigrant” policy, concurred with the MPI. The CIS criticised the new study for failing to reconcile its results with other data.

“It seems extremely unlikely that the Census Bureau, the Department of Education, and other records of vital statistics miss so many people year after year,” said Steven Camarota, CIS’s director of research, in a Sept. 22 release.

Even illegal immigrants know they need birth certificates for their children, if only to ensure U.S. citizenship for them, Camarota told The Epoch Times. The children then enroll in schools. If the Census Bureau missed that many illegal immigrants, its estimates would diverge much more from birth and school data. But they don’t, he said.

“You have to do a reality check,” Camarota said. “Does it comport with the real world? And I don’t think [the new study authors] did that.”

The authors of the new study rejected the criticism.

“These criticisms are seriously flawed, and reflect a deep misunderstanding of the mathematical techniques we employ,” Kaplan, a professor of operations research, public health, and engineering, told The Epoch Times via email.

In an article addressing some of the pushback, the authors pointed out that the old estimates relied on illegal immigrants answering questions honestly on surveys, or answering at all.

“The residual method is giving a precise estimate of the wrong quantity,” they stated.

They didn’t explain, however, how the old estimates seem to align with birth certificates and school enrollment data.

While critical, the MPI researchers commended the new study for making “creative use” of the new DHS data. The MPI noted that the new study’s estimates of growth in illegal immigrant population after 2000 align with other research.

Camarota said there could be more illegal immigrants than the usual estimates show and that perhaps the new study indicates that.