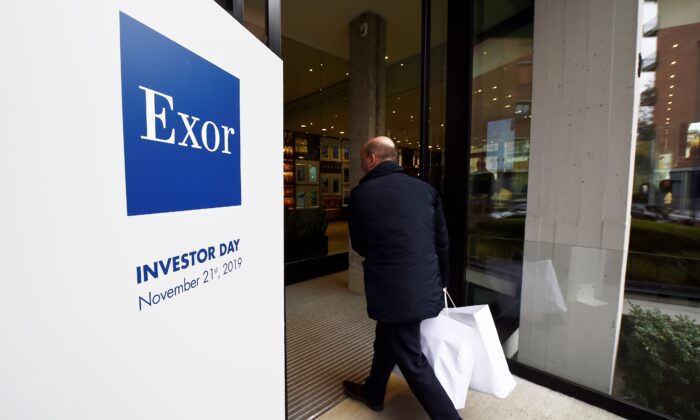 The Exor logo is seen on investor day held by the holding group of Italy's Agnelli family in Turin, Italy, on Nov. 21, 2019. (Massimo Pinca/Reuters)
Markets

MILAN—Exor, the holding company of Italy’s Agnelli family, has entered a preliminary agreement to sell its PartnerRe re-insurer to French insurance group Covea for $9 billion, bringing home a deal that had been derailed by the coronavirus pandemic.

The price tag is unchanged from last year, when Covea walked away from the purchase of the Bermuda-based firm saying it could no longer buy it under the terms of a pre-pandemic agreement, which Exor refused to change.

Exor and Covea said in a joint statement they expected to sign a definitive agreement by the end of the year, while completion of the deal was slated in mid-2022.

Based on the terms of the agreement, Exor will gain an aggregate cash return of around $3.2 billion from its purchase and disposal of PartnerRE, including dividends paid by the reinsurer since 2016.

The deal further boosts its firepower for future acquisitions, which currently amounts to about 3 billion euros ($3.5 billion) to 2023.

The single largest shareholder in carmaker Stellantis and the parent of companies including Ferrari, CNH Industrial, and football club Juventus, Exor has made its first steps into luxury goods and services.

Last year it became the largest shareholder in Chinese luxury group Shang Xia, co-founded by France’s Hermes, and in March it took a 24% holding in high-end shoemaker Louboutin for 540 million euros.

The $9 billion euro cash consideration reflects a common equity value for PartnerRe of $7 billion, the companies said, adding that New York-listed preferred shares of PartnerRe were not part of the acquisition.

“The acquisition of PartnerRe is fully consistent with Covea’s long-term strategy to anticipate the evolution of the global insurance environment through international growth and through the diversification of products, risks and geographies,” the statement said.

After the deal collapsed in 2020, Covea agreed to invest 1.5 billion euros in entities managed by PartnerRE and in undisclosed investments related to Exor, in a bid to normalise relations between the two companies.

Covea said the reinsurance and investment cooperation agreements involving Exor, PartnerRe, and Covea had helped it to better know and appreciate PartnerRe and its management.

Exor and Covea will continue their reinsurance cooperation, with Exor acquiring from Covea interests in special purpose reinsurance vehicles managed by PartnerRe for around $725 million.

These vehicles will invest in property catastrophe and other short-tail reinsurance contracts underwritten by PartnerRe, the companies said.

Covea, Exor, and PartnerRe will also continue to jointly invest in Exor-managed funds.