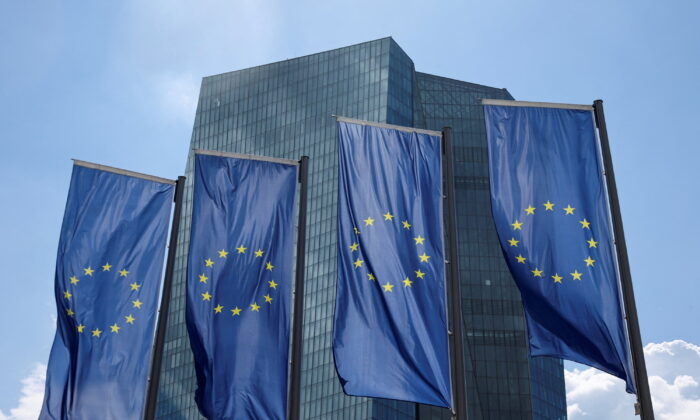 BRUSSELS—Eurozone economic growth was slightly less robust in the second quarter than forecast but still strong, and employment rose again, revised data from the European statistics office showed on Aug. 17.

Gross domestic product (GDP) in the 19 countries using the euro rose 0.6 percent quarter-on-quarter in April-June for a 3.9 percent year-on-year rise, Eurostat said. The office had previously estimated quarterly growth at 0.7 percent and the year-on-year rise at 4.0 percent.

“This is still a solid outturn (outcome) which leaves the GDP figures painting a flattering picture of growth dynamics in H1 2022,” said Ricardo Amaro, economist at Oxford Economics.

But economists believe that second-quarter growth might be the economy’s last hurrah before ever-higher inflation and supply chain problems cause a mild recession over the course of the next 12 months.

“We think growth will slow in the second half of the year and into 2023, with our latest forecasts anticipating near-stagnation in Q3 to be followed by a modest contraction in Q4 and almost no growth at the start of 2023,” he said.

Looming over all of Europe’s economies is the war in Ukraine. Uncertainty about the course of the conflict has deflated consumer and business confidence, while fears remain that a complete cutoff of Russian gas supplies in response to EU sanctions would plunge the bloc into a much deeper downturn.

Second-quarter growth was mainly a result of a strong performance by Italy and Spain, which grew 1.0 percent and 1.1 percent quarter-on-quarter respectively, and came despite stagnation in the bloc’s biggest economy, Germany.

“Looking ahead, we doubt that a recession in the euro zone will cause mass layoffs …,” said Jessica Hinds, economist at Capital Economics.

“We expect the downturn to be fairly shallow and short-lived, with activity recovering by Q2 next year and short-time working schemes cushioning the blow, especially in Germany’s exposed manufacturing sector,” she said.

“But there is little scope for further big increases in euro-zone employment in the coming quarters—and the risks to our GDP forecast are increasingly skewed to the downside.”