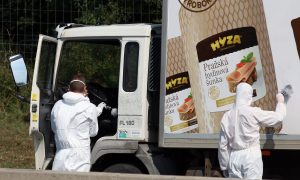 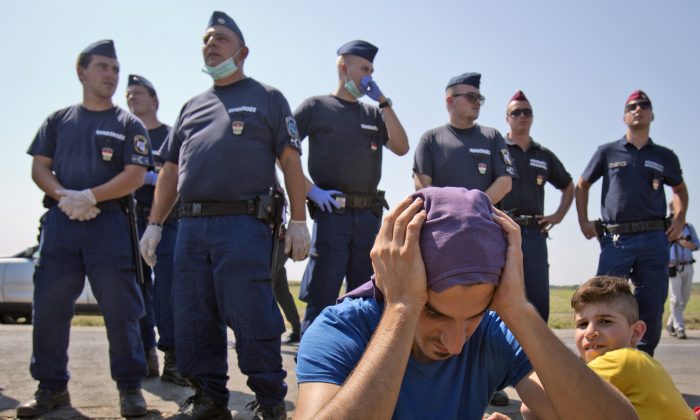 A refugee holds his head in front of a police cordon near the Serbian border in Roszke, Hungary, Friday, Aug. 28, 2015. (AP Photo/Darko Bandic)
Europe

VIENNA–Death and desperation mounted in Europe’s migrant crisis Friday as Austrian police said 71 people appeared to have suffocated in the back of an abandoned truck, while an estimated 200 people were feared drowned off Libya when two overloaded boats capsized.

More than 300,000 people have sought to cross the Mediterranean Sea so far in 2015, up from 219,000 in all of last year, as European authorities grapple with the largest influx since World War II.

The death of 71 people locked in the truck on a highway south of Vienna shows “the desperation of people seeking protection or a new life in Europe,” said Melissa Fleming, spokeswoman for the U.N. refugee agency in Geneva.

The International Office of Migration has recorded 2,636 deaths linked to Mediterranean crossings this year, and more may have vanished beneath the waves out of sight of rescuers.

Each day, thousands are boarding flimsy boats for Italy or Greece, and many more are placing themselves and their families at the mercy of human traffickers by slogging for days or weeks through the western Balkans toward what they hope will be a brighter future. Most are fleeing war, conflict or persecution in countries including Syria, Afghanistan and Eritrea.

Several factors are driving the surge of Syrian refugees, including worsening conditions in the country’s refugee centers partly due to budget cuts and the reluctance of neighboring countries to take in more people, the U.N. said.

Two ships went down Thursday off the western Libyan city of Zuwara, where Hussein Asheini of the Red Crescent said at least 105 bodies had been recovered. About 100 people were rescued, according to the Office of the U.N. High Commissioner for Refugees, with at least 100 more believed to be missing.

“A coast guard team is still diving in and checking inside to see if there’s anyone else,” Asheini added.

Workers pulled the dead from the water and placed them in orange-and-black body bags that were laid out on the waterfront in Zuwara, about 105 kilometers (65 miles) west of Tripoli. Several victims floated face-down in a flooded boat towed into the harbor. At least one of the dead wore a life vest.

Most of the people rescued came from Syria and sub-Saharan African countries, said Mohamed al-Misrati, the spokesman for the Red Crescent in Libya.

“You can imagine what they are going through. Some of them are still looking for their friends. We’re trying to speak to them but many of them are too traumatized to even talk about the incident,” he said.

Lawless Libya, which doesn’t have the resources to deal with the flow of migrants, is a prime starting point for many, with human traffickers filling boats they know cannot reach European shores but figuring that rescuers will pick up the passengers and take them to Italy.

Often, the smugglers force migrants below deck where their chances of survival are even dimmer. Rescuers who boarded one boat Wednesday counted 52 people who suffocated in the hold, according to the U.N. refugee agency. Survivors said the smugglers beat them with sticks to keep them below deck, and one said they demanded money to let the migrants come up for fresh air.

While the U.N. agency said more than 300,000 refugees crossed the Mediterranean so far this year, the International Office of Migration, an intergovernmental agency, put the number at 332,000 on Friday.

The U.N. said 200,000 have landed in Greece alone â a shorter sail from Turkey, with a nightly influx of hundreds of Syrian refugees. Thousands more make that trip daily in small, inflatable boats that aren’t designed for the open sea.

Greece’s coast guard said Friday it had rescued 665 people from 20 boats in the previous 24 hours. Hundreds more presumably made the trip on their own.

Once in Greece or Italy, migrants still face long and dangerous journeys to their final destinations. From Greece, the primary route is by foot and train through Macedonia, Serbia and Hungary before heading into western Europe.

Hungarian police arrested four people overnight after the decomposing bodies of 71 migrants, including included eight women and four children, were found in the truck on Austria’s main highway.

3 Arrested in Connection With Deaths of 71 Migrants in Austria

The suspects, allegedly part of a larger Bulgarian-Hungarian smuggling ring, include an Afghan and three Bulgarians, one of whom owns the truck, Hungarian national police spokeswoman Viktoria Csiszer-Kovacs said. Police raided houses and questioned almost 20 others in the case.

Hans Peter Doskozil, chief of police in eastern Burgenland province, said the migrants probably suffocated. At least some of the dead were Syrian, travel documents indicated, though most of the partially decomposed bodies remained unidentified.

“One is basically at a loss for words in view of the extent of suffering there,” said Steffen Seibert, spokesman for German Chancellor Angela Merkel.

The tragedy “should serve as a wake-up call … for joint European action” in dealing with the torrent of migrants flocking to Europe, said Austrian Interior Minister Johanna Mikl-Leitner.

Added Fleming: “We believe this underscores the ruthlessness of people smugglers who have expanded their business from the Mediterranean Sea to the highways of Europe. It shows they have absolutely no regard for human life, and that they are only after profit.”

At Budapest’s Keleti train station, volunteers tending to migrants asked people to bring candles and flowers for a tribute there Friday in memory of the 71 victims.

The U.N. refugee agency urged authorities to crack down on smugglers and to expand safer, legal ways for refugees to reach Europe.

Hungarian police said they arrested 21 suspected human traffickers in Budapest. They included 16 Romanians, two Syrians, two Hungarians and a Russian citizen. Police said they confiscated 16 vehicles, which had been carrying 112 people, including several Syrians, traveling along the Balkans route into the European Union.

Prosecutors in Sicily detained 10 people on suspicion of smuggling and murder Friday for having allegedly crammed dozens of migrants into the airless hold of a boat where 52 bodies were found earlier this week.

The Swedish ship Poseidon rescued 439 survivors Wednesday but crew members made a grisly discovery when they looked into the hold. The rescuers ended up smashing the deck to reach the 52 corpses inside.

Palermo prosecutor Maurizio Scalia said the detained crew included seven Moroccans, two Syrians and a Libyan who was the “violent” enforcer of order on the ship. The migrants were mostly from sub-Saharan Africa: Sudan, Senegal, Nigeria but also Pakistan and Bangladesh.

The International Office of Migration said up to 2,000 migrants are crossing every 24 hours from Greece into Macedonia and then into Serbia, with government resources under strain. Greece has been the main destination this year, receiving more than 218,000, and the office warned the flow could increase to over 3,000 daily.

More than 1,000 refugees and migrants, including families with young children, gathered at Greece’s northern border with Macedonia on Friday, and scuffles broke out as they waited to be allowed across. Several hundred had arrived the previous day and spent the chilly night in the open, lighting small fires to keep warm. Aid organizations were providing medical help, shelter, food and water, while volunteers had left clothes for those passing through. Most were from Syria and Afghanistan, while others were from Iraq, Iran, Pakistan and Bangladesh.